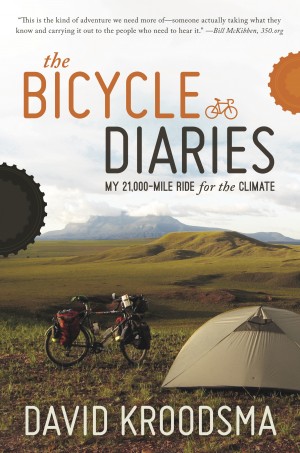 The Bicycle Diaries: My 21,000-Mile Ride for the Climate

By David Kroodsma
Environmental researcher David Kroodsma bicycles from his front door in California to the tip of South America, gaining unique insights about climate change along the way. Selected as a Shelf Unbound Notable Book of 2014 and a finalist for both the Montaigne Medal and Forward Review’s IndieFab Book of the Year. More
Environmental researcher David Kroodsma dreamed of bicycling down his driveway in Palo Alto, California, and pedaling for months until he reached the tip of South America. When he finally planned his trip, he wanted more than just adventure; he also wanted to raise awareness about the impacts of climate change on the countries he would explore. So he set out on a well-packed bicycle with a business card, a laptop, and an eagerness to share his knowledge. His project, Ride for Climate, caught on; he gave over 100 school and assembly presentations, garnered dozens of newspaper accounts of his journey, and appeared on international television.

During nearly two years of travel, Kroodsma witnessed the world from a seat of a bicycle. He traversed unique ecosystems, coastline settlements, and glaciated mountains. "While biking," he writes, "no windshield protects you from the rain, heat, or wind, and no wall divides you from the people along the road." Countless people, from subsistence farmers to petroleum engineers, sheltered him and shared their stories. These experiences transformed and personalized his understanding of climate change, and in The Bicycle Diaries, Kroodsma shares these unexpected insights through a gripping travel narrative.

The founder of Ride for Climate, David Kroodsma has logged more than 30,000 miles of loaded bicycle touring. He has worked as a climate journalist, as a consultant for philanthropy, and as a climate researcher. In 2009, he won an international competition to represent Hopenhagen at the climate conference in Copenhagen, Denmark, and write for the Huffington Post. David holds a B.S. in physics and an M.S. in interdisciplinary environmental science from Stanford University. He lives with his wife, Lindsey, in San Francisco, California.

You have subscribed to alerts for David Kroodsma.

You have been added to David Kroodsma's favorite list.

You can also sign-up to receive email notifications whenever David Kroodsma releases a new book.