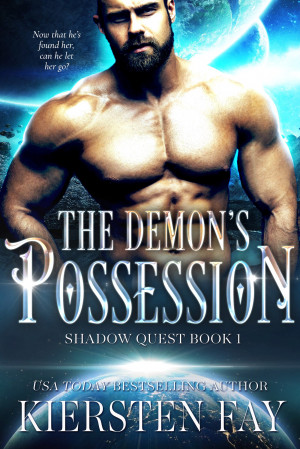 Rated 4.83/5 based on 6 reviews
A mysterious woman escapes her long slavery, only to find herself once again trapped on a ship where she learns what living free can truly be like. Along the way she makes great friends, who help her figure out her shadowed past, and steals the heart of a stubborn demon while she’s at it. More
After being enslaved on the spaceship Extarga for most of her life Analia has no memory of her life before, and has lost all knowledge of her people. Her mysterious gift and pointed ears are the only indication that she is different.

Analia is alone, and for all she knows, shes the last of her kind. By chance Analia escapes her captors, and hides herself on the merchant ship Marada, planning to get off at the very next stop.

Unfortunately for her there is no next stop, the crew is planning a delivery that could take months and, according to a stipulation in the newly signed contract, no one is allowed on or off the ship until the package is delivered.

Kiersten Fay is the USA Today bestselling author of the steamy Ever Nights Chronicles, the award winning Shadow Quest series, and the popular Creatures of Darkness Series.

The first book in her Ever Nights series, Keeping His Siren, won the 2018 National Excellence in Romance Fiction Award, and the third Shadow Quest novel, The Demon’s Retribution won the 2012 Gravetells Favorite Story award, earning Fay a nomination for Favorite Author in that same year.

When not writing or catering to her two demanding cats, she can be found fussing over cover designs for her next novel.

For more information on Kiersten Fay, or her upcoming romance novels, visit her website www.kierstenfay.com 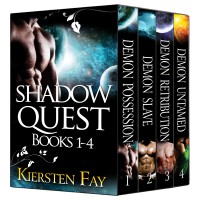 I really enjoyed this book! It was a mixture of my favorite genres; SciFi, Fantasy, Paranormal and Romance.

There are space ships, slaves, Demons, unknown creatures with special abilities and gifts, war zones, magical wards, trade contracts, betrayals, finding and overcoming ones past finding love (and the love scenes are HOT) looking towards the future and a quest to save a race from those who have decimated others including the Demons.

Demon Possession is about a woman, Analia, an escaped slave who you don't find out what she is until you are mostly to the end. Analia has special powers and is the reason for her captivity she thinks that only 200 years have past since becoming a slave but it turns out that it was twice that. The space ship that she stowaway on is run by a family of Demons, all of whom have a rough past when their planet is betrayed by those closest to them and ends up being destroyed. The demons have a hard time with trust and especially with their heart. Since Analia has been a slave for as long as she can remember she is very wary when captain Sebastian finds her and especially since there is an undeniable attraction that they each share. The story takes you along a journey to deliver cargo with stipulation in the contract that no one may enter or leave the ship and the trip could take several months. Along the way Analia and Sebastian fight against their innate desires and have to overcome the pains of their past and look toward their future while finding comfort with each other. The person that owned Analia before her escape is coming after her and by her being on the ship she endangers the entire crew, whom she has gotten to know, like and in some become the closest thing to a family she has ever had (that she can remember). Aanlia was very careful to not make her powers know to the others because she feared that they would use her like her old captive did, but once he catches up and starts to fire upon the ship she decided that sacrificing her life to save the others was worth it and she uses her gift to save everyone.

Once the contract is fulfilled it turns out that the intended recipient of the cargo was Analia and the truth of her past and what she is, is starting to be revealed and is the beginning of a quest to save her home planet and people.

The transition between POV is smooth and you don't have that abrupt change when reading between different characters. It adds to the story and the reader is able to get some background information as well as how others are taking in what is happening and the feelings of the others. The one thing that I felt was missing was more information about what exactly Analia went through for all those centuries, whither it was from her captive boating about it or from her explaining things or flashes of her memories. I feel as empty about her captivity as she does about past before becoming a slave.

I fell in love!! I fell in love with the characters and the book!! Every now and then a book comes along were I get all emotional -sadness, anger, joy in the love they found, anxiety in what will happen next.

Our main characters are Analia the runaway salve, and Sebastian, the captain who's ship she stowed away on. This book is definitely science fiction romance. There are different species and figuring out who Analia is is all part of the mystery. She has little memory of who she is and is constantly afraid of her old master finding her and what would happen if Sebastian finds out about her gift.

Sebastian is a demon. Complete with horns and a beast - like temper. You never know where you stand with him, one minute he is a blank wall with no emotion , the next he is trying to stifle the sexual energy flowing around those two.

I thought the story dragged out a bit. Then again I did read this book in two days ,I was so glued to the story. Then it just ups and finishes on me. :( Talk about your cliffhanger ending.

Anyway, I thought this was a wonderful piece of romance fluff, where if you are in the mood for fantasy, deep space, and romance, then this is the book for you!

Really enjoyed every page of this.
Can't wait till the next book.

Worth every penny. Hope it will not be too long wait for book two!

(reviewed 3 days after purchase)
dana S reviewed on July 30, 2011
(no rating)
This was a great read. I didn't want to stop reading and am now waiting for book two. I recomend this book to everyone who would be willing to read it.

(reviewed 37 days after purchase)
Lorell G reviewed on May 11, 2011
(no rating)
I would definitely buy from this author again! Really enjoyed your book - I love forced seduction/captive stories:)

You have subscribed to alerts for Kiersten Fay.

You have been added to Kiersten Fay's favorite list.

You can also sign-up to receive email notifications whenever Kiersten Fay releases a new book.