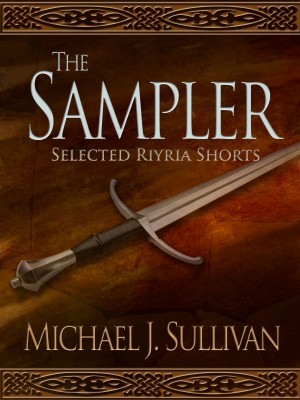 The Thieves: Originally, this was a scene written for Nyphron Rising (the first novel in the Rise of Empire omnibus). Eventually, it became the opening of Theft of Swords when Orbit purchased and republished the series as three, two-book volumes. Here is a bit about that story: A band of thieves sets upon two lonely riders in the middle of the night. They had a larger party. They had the element of surprise. There was no reason to be concerned, but they didn’t realize who they were dealing with.

The Viscount: Originally titled “The Viscount and the Witch,” this was published in the fall of 2011. It was written to provide a gift to my fans after my books were removed from the market to make room for Orbit’s versions. It’s also the seed that later became The Riyria Chronicles, and this short now appears as the second chapter of The Rose and the Thorn. Here is a bit about this short: Eleven years before they were framed for the murder of a king, before even assuming the title of Riyria, Royce Melborn and Hadrian Blackwater were practically strangers. Unlikely associates, this cynical thief decides to teach his idealist swordsman partner that no good deed goes unpunished. Will Royce wind up proving his point or be schooled himself?

The Jester: Originally released in the Unfettered anthology (edited by Shawn Speakman and published by Grim Oak Press), I did something a bit unusual with this short story. Faced with the word count restrictions inherent with anthologies, I wrote what is essentially the climax for what could have been a full-length novel. I throw the reader into the middle of the story and make only brief illusions to what had come before. It’s an interesting experiment and seems to have worked out well based on the high praise it has received. Here is a bit about this story: Stop me if you’ve heard this one. A thief, a candlemaker, an ex-mercenary, and a pig farmer walk into a trap…and what happens is no joke. When Riyria is hired to retrieve a jester’s treasure, Royce and Hadrian must match wits with a dwarf who proves to be anything but a fool. Difficult choices will need to be made, and in the end those who laugh last do so because they are the only ones to survive.

The Death of Dulgath excerpt isn’t a short story. It’s the opening scene to the new novel, which will be coming out before the end of 2015. Here is a bit about that book.
Download: epub
Price: Free! USD
Add to Library
Create Widget
Tags: adventure action fantasy short stories short story epic thieves thief sword riyria
About Michael J. Sullivan

About the Series: The Riyria Chronicles

The Riyria Chronicles are a series of novels and short stories following the adventures of Royce Melborn (a cynical thief) and Hadrian Blackwater (an idealistic ex-mercenary) in the years prior to the events of The Riyria Revelations.

Also in Series: The Riyria Chronicles

Reviews of The Riyria Sampler by Michael J. Sullivan