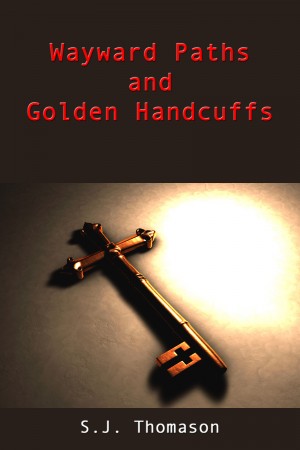 By S.J. Thomason
Rated 5.00/5 based on 3 reviews
A college football player finds himself embroiled in a battle against fate and his own shortcomings as he strives to convince his doubting mom of the truths behind Christianity. Will he be successful? More
Being a CEO’s son in the top one percent of income earners certainly has its perks, yet such diversions fail to impress Nick. Success to Nick is defined instead by helping those less fortunate and embracing Christianity. Success to his mom is defined differently, through a passion for work, a capitalization on assets, and a drive to accumulate wealth. Convincing his successful mother to follow Jesus' example is nearly impossible, though, since she feels that Jesus is only a myth, immortalized to control the masses. Then fate steps in and Nick finds himself clashing with the obstacles of alcohol, abundance, and adultery as he strives to outrun time and alter fate to present a compelling argument in support of Jesus to the mother he loves.
Download: epub mobi (Kindle) pdf more Online Reader
rtf lrf pdb txt
Price: Free! USD
Add to Library
Create Widget
Tags: romance love jesus football christian altruism materialism orphanage abundance and prosperity
About S.J. Thomason

SJ Thomason lives with her two sons, chief security officer/pooch, and husband who would rather be living in a houseboat near his identical twin brother. She works as a college professor, which helps to pay the mortgage.

Over the past few decades, she has attempted to reconcile the logic and rationality of nature with the unexplained force of love within. World religions address the latter, yet none so perfectly and comprehensively as Christianity. By diving into the academic, literary, and church communities, she's found many answers to the complicated questions of life. Life's short, sometimes ugly, and there are no guarantees. If she were to be hit by a bus tomorrow (which might very well happen), she'll rest in peace knowing that a permanent record of her discoveries of the way, the truth, and the life exists for her family, friends, and anyone else interested.

To reach S.J. Thomason, feel free to email her at alwayslearning1225@gmail.com or connect on Twitter @sjthomason1225.

Reviews of Wayward Paths and Golden Handcuffs by S.J. Thomason

A great book with an inspirational message about love and life. Must read.

A wonderful book about the relationship between a mother and son, faith and success. I read this in one day straight through. Beautiful story! Buy it. You won't be let down.

I gave this book five stars. I read it at the recommendation of a friend. It was well-written, concise, and offered an interesting twist at the end. The author weaves a tale of a young adult's unrequited love for a girl from his high school and college years, along with his reciprocated love for his mother. Another man is also in love with his mother - or her wealth. Other colorful and somewhat humorous characters fill the story, which is written around Christian themes and messages. While the story lines were engaging and the twists riveting, the best thing about this book was its convincing message about Christianity, which was infused throughout. Doubters may want to give this one a thoughtful read. I look forward to more of her books.
(review of free book)

You have subscribed to alerts for S.J. Thomason.

You have been added to S.J. Thomason's favorite list.

You can also sign-up to receive email notifications whenever S.J. Thomason releases a new book.