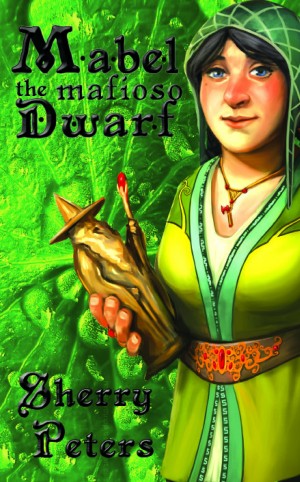 By Sherry Peters
New family, new friends, a run in with the mafia . . . and Mabel thought dating was hard! More
Exiled from her family and everything she knows, Mabel Goldenaxe embarks on an adventure with her estranged Mam and the famous elf Aramis. In her new city of Leitham, a bustling metropolis where movies are made and female dwarves are free to choose their own paths, Mabel quickly discovers not everything is as perfect as it first appeared. Her desire to heal an axe-throwing injury turns disastrous and Mabel finds herself a pawn in the dealings of the Elven Mafia. Every choice she makes carries the threat of dire consequences for her newfound family. Can Mabel navigate the betrayal, missteps and intrigue to live the life she wants? Or will she be forever doomed to be a mafioso dwarf?
Available ebook formats: epub mobi pdf lrf pdb txt html
First 30% Sample: epub mobi (Kindle) lrf more Online Reader
pdb
Price: $4.99 USD
Buy Add to Library Give as a Gift
How gifting works
Create Widget
Tags: mafia elf dwarf movies elves dwarves gender roles gender identity
About Sherry Peters

Author Sherry Peters lives in Winnipeg, where she spends her days working at St John's College at the University of Manitoba, and her evenings and weekends writing. Her first short story, "The Greatest Honor" (Aoife's Kiss, September 2007), went on to be featured in their best-of anthology "Wondrous Web Worlds Vol. 8". Since then, her two novels, "Mabel the Lovelorn Dwarf" and it's sequle "Mabel the Mafioso Dwarf" have been nominated for the Aurora Award for best YA novel, and "Mabel the Lovelorn Dwarf" won the 2014 Writer's Digest self-published e-book award in the YA category.

Sherry graduated from the Odyssey Writing Workshop in 2005 and earned her M.A. in Writing Popular Fiction from Seton Hill University in 2009. During her time in both these programs, she he developed many techniques to detect and silence her inner saboteur.

You have subscribed to alerts for Sherry Peters.

You have been added to Sherry Peters's favorite list.

You can also sign-up to receive email notifications whenever Sherry Peters releases a new book.