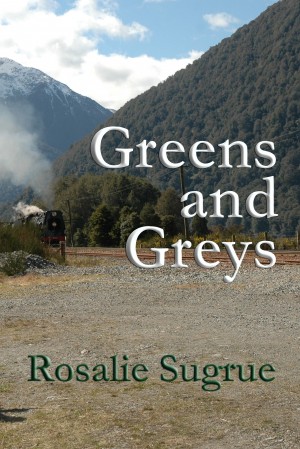 Molly’s heart warming story of growing up in New Zealand in the 1950s and 1960s parallels that of many Pasifika young people, as they grapple with what it means to grow up today, while staying loyal to their family, church and culture. They too face issues of morality, sex, sin, suicide, homosexuality and all sorts of other unmentionables.

In Greens and Greys we find that we can meet and overcome life’s challenges, grow into a secure personal identity and develop a robust faith through trial, error and openness to learning.

Praise for Greens and Greys

“Thank you Rosalie for your passion for social justice. This book challenges us to think about complex issues that unfortunately are still very real today. It is thought-provoking and an ideal book for group discussion and dialogue. Each chapter brings to life questions and a reality we sometimes would rather avoid for fear of the unknown. We all have a responsibility to care and make a stand for life.” Mataiva D. Robertson: Social Issues Convenor for Sinoti Samoa, Methodist Church of New Zealand

“Molly’s story will take you through experiences spiritual and sexual seldom talked about openly, but so often struggled with in silence. The skilful and insightful choice of words – both descriptive and sometimes disturbing – creates images and recalls memories for people of all ages. This book is engaging, informative, entertaining and challenging.” Rev Loyal Gibson

Rosalie May Sugrue is a wife, mother and grandmother. She is a retired teacher and motelier with a background in Bible study.

Rosalie has been active in Jaycees, the Methodist Women’s Fellowship, National Council of Women, the Churches’ Agency on Social Issues, Victim Support and U3A. She has plays, poems, prayers, Bible puzzles and articles published in many church magazines in NZ including a regular Bible Challenge puzzle in Touchstone. She also has work included in devotional anthologies in Canada, the UK and the US.
Available ebook formats: epub
Price: $9.99 USD
Buy Add to Library Give as a Gift
How gifting works
Create Widget
Tags: coming of age sexuality faith new zealand personal identity west coast christchurch greymouth 1950s and 1960s oe to uk and ireland
About Rosalie Sugrue

Rosalie Reynolds Sugrue is a fifth generation West Coaster. Both her parents being fourth generation Coasters whose forebears came seeking gold. Rosalie’s great grandfather, James Reynolds, was a local preacher from Cornwall who preached to miners on the beaches and helped establish the first Methodist church in Hokitika. His wife, Eliza, signed the petition that gave women the vote.

Rosalie’s mother Elva Reynolds was a Methodist Deacon and also a lay preacher. Rosalie is a past president of the NZ Lay Preachers’ Association, and the inaugural facilitator of the Methodist Lay Preachers Network 2004, serving as a co-facilitator until 2008. She has led hundreds of church services in New Zealand and the UK. She has also led rest home services, family services, cafe style worship, house blessings and devotions at Methodist Conference and in many other situations.

A wife, mother, grandmother, great grandmother and author, Rosalie is a retired teacher, and has also worked as a psychiatric nurse and motellier. She has been active in Jaycees, the Methodist Women’s Fellowship, the Community of Women and Men in Church and Society, National Council of Women, the Churches’ Agency on Social Issues, Victim Support and U3A. She continues an active role as a lay preacher leading one to three services every month in a variety of churches.

Reviews of Greens and Greys by Rosalie Sugrue

You have subscribed to alerts for Rosalie Sugrue.

You have been added to Rosalie Sugrue's favorite list.

You can also sign-up to receive email notifications whenever Rosalie Sugrue releases a new book.