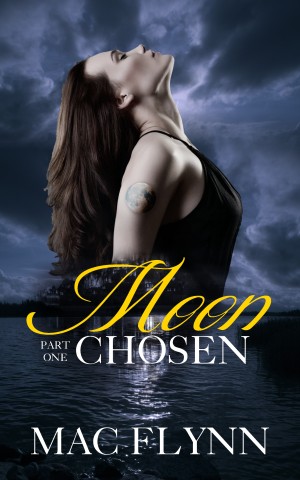 A seductress of sensual words and a lover of paranormal plots, Flynn enjoys writing thrilling paranormal stories filled with naughty fun and hilarious hijinks. She is the author of numerous paranormal series that weave suspense, adventure and a good joke into a one-of-a-kind experience that readers are guaranteed to enjoy. From long adventure novels to tasty little short-story treats, there's a size and adventure for everyone.

Want to know when her next series comes out? Join The Flynn newsletter and be the first to know! macflynn.com/newsletter/

Also check out her website at macflynn.com for listings and excerpts of all of her books!

About the Series: Moon Chosen

Twelve kidnapped women, a strange curse, and sensual cravings entwine the strange island on the lake.

i enjoied readint this book. for me it has something fresh about it. she is strong and stuborn, caring and selfles.she absolutely does not want to be on that iseland and plans to escape but not alone, she wants to take all the other kiddnaped woman with her. he is stron and stuborn as well. he seemed frustrated and unhappy that his future is decidet by a ritual, wich makes him look like a distant, unfrindly jerk. both of them are not happy with the whole Thing, but the ritual draws them together...... i think this is a great start for an awesome book.

Moon Chosen is the first book in the Moon Chosen serial by Mac Flynn. It tells the story of Sophie and Erik. Sophie is one of twelve human women who have been kidnapped and taken to Wolf Island to partake in a ceremony that pairs them with a werewolf mate. Erik Greenwood is the only son of the ruling house of the werewolves. He had declined partaking in the ritual however by as of yet unrevealed ways he was chosen as Sophie's mate.

I found Sophie to be a strong, smart, protective, capable woman with a good head on her shoulders. I liked that she put the welfare and safety of others above herself. Erik I thought was a selfish, arrogant but sexy hot jerk. However we haven't really learned anything about him so I'm sure he will become more likable as the story plays out. I loved the secondary character of George. He seems like he will be a fun character in the series.

I enjoyed the book and look forward to the nest one. I recommend this book to all paranormal and shifter lovers.

You have subscribed to alerts for Mac Flynn.