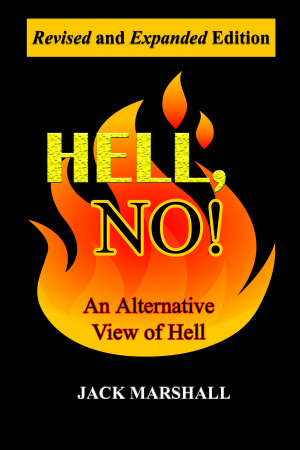 Hell, No! An Alternative View of Hell

By Jack Marshall
Rated 3.00/5 based on 1 reviews
What is hell? Where is hell? Is it really a place of eternal damnation and torment, of untold misery and suffering that lasts forever? Who is deserving of hell? Who isn’t? How do we really know? This study presents an alternative view of hell that is scripture-based, yet unique in its presentation, showing that Hell is not what we have been led to believe. More
Hell is, perhaps, the most common and misunderstood subject that one could consider in the Bible. For centuries, we have been plagued by the interpretation that it is a horrific place of torment that all "sinners" will go to after they die. But is this really the case? Is there really a place called hell that only Christians will avoid? Is this really what the Bible teaches, or is there something we are missing due to the fact that tradition has blinded us for so long? This study uses a scripture-based approach to present an alternative view of hell that may surprise you.
Download: epub mobi (Kindle) pdf more Online Reader
rtf lrf pdb txt
Price: Free! USD
Add to Library
Create Widget
Tags: hell hades heaven kingdom of god hellfire god and human kind everlasting life everlasting love hell fire everlasting condemnation
About Jack Marshall

I was born in California in 1957, but raised in Oklahoma, where my experience with Christianity began at the age of 19. After several years of attending various denominational and non-denominational churches, my love for the Bible and desire to understand the scriptures became a vital part of my life. Ordained in my twenties, I spent several years ministering in homes, jails, and churches. Through in-depth study for the past 40 years, I have discovered that the message of scripture is truly one of hope, love, and encouragement for the entire world.

In this day and age probably most people would agree that hell isn't a burning place somewhere under the earth where souls are eternally tortured. However, the author takes it a little further than that in a view that denies any traditional view of hell and endorses universalism, the idea that all will be saved.

The author starts out by refining the definition or even redefining some words. He recognizes a spiritual rising in addition to a physical rising. "Death" can be seen as walking in the carnal mind and tribulation can be seen as a purifying of the soul like a fire is used to purify silver or gold.

Similar views were endorsed by some early Alexandrians. I'm skeptical of views that depend on word definitions, but perhaps a reconciliation of ideas could depend on a good understanding of eternity, what Mr. Marshall has referred to elsewhere as the "eternal now." I remain open-minded.

You have subscribed to alerts for Jack Marshall.

You have been added to Jack Marshall's favorite list.

You can also sign-up to receive email notifications whenever Jack Marshall releases a new book.