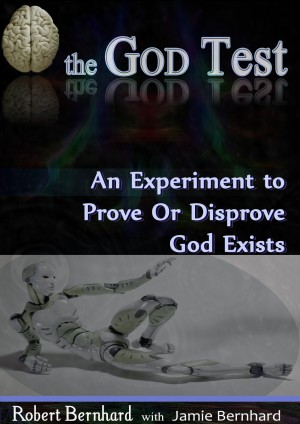 The God Test: An Experiment to Prove or Disprove God Exists

By Robert Bernhard
Be privy to the test developed by a Harvard/MIT scientist before it begins--targeted to determine whether a unique feature of our consciousness can or cannot ever in principle be described/explained by natural laws. This is a natural setting for an amicable tug of war between Atheists and Christians. It is based in mainstream neuroscience and synthetic biology, not spiritualism or creationism. More
▓▒░│About the Book│░▒▓
The God Test is an unusual nonfiction work, spanning a wide range of subjects appealing to diverse readers, unified around an interest in consciousness and the mind-body problem. It is intelligible enough to reach a general audience, yet sophisticated enough to interest the science literate. It should be owned by every philosophy and seminary student in America, but at the same time fits in any atheist's toolbox, or on the shelves of science enthusiasts whose interests include neuroscience/neurology, consciousness, AI, and applications of quantum mechanics/physics to the mind-body problem. The author, a lifelong atheist turned agnostic, is a retired biophysicist and systems designer.
It is unlike numerous other books claiming a scientific perspective then attempting either to prove or disprove God or the soul by some old-hat or hand-waiving method. It does not seek to prove or disprove God, the soul, the spirit, or life after death. But it may be the first and only book ever to offer an experiment capable of yielding evidence that could either support or refute the existence of (the Judeo-Christian notion of) God. The text provides sufficient reasons for both atheists and the faithful to predict that the results will prove their respective and opposite positions.
▓▒░│About the Test│░▒▓
The purpose of the book is to propose an experiment (the God test) that is revolutionary from the standpoints of science and religion. It is based largely on conventional neuroscience, the nature of superhumanly intelligent computers predicted to emerge within the next several decades, and the growing field of synthetic biology.
The proposed test does not involve elements of faith, prayer, or mysticism, and is unlike any other so-called God experiments described elsewhere. It is not concerned, for instance, with whether individuals are genetically predisposed toward certain religious beliefs; or with identifying the neurological bases of individuals' mystical or religious experiences. Yet the test is designed so that a valid interpretation of its results may have powerful religious implications. It is thus intended to put a scientific lens to the everlasting questions of whether God and the human soul do or do not exist. However, the test is not specifically designed to resolve these overarching philosophical questions. It has a rather more narrow explicit focus, instead.
Briefly, the test is targeted only to determine whether a unique feature of our consciousness, the subjective first-person experience, or conscious feeling of the self, can in principle ever be described or explained by natural laws. This is a natural setting for an amicable tug of war between Christians and Atheists. Christians easily may see this feature as evidence that only God could have created it. Atheists will insist that it can be explained some day by evolution, and by earthly chemistry and physics. The possibility of ever developing a scientific test here probably strikes most people as so far fetched, so implausible, that it must be the work of a surreal imagination, if not a hoax—perhaps a veiled intrusion by an intelligent-design advocate—or perhaps merely wishful thinking. But readers will find that it is, in fact, none of these.
▓▒░│About the Author│░▒▓
Robert Bernhard's 40-year+ career in the sciences includes working at Harvard's Computational Laboratory, MIT's Instrumentation Lab, The Monrobot Laboratory, ITT labs, Grumman's Aircraft Research Department, the Molecular Biology Department at New York's Albert Einstein College of Medicine, and the Medical Education Division at Excerpta Medica (Elsevier). He was editor at IEEE Spectrum, Scientific Research, Nucleonics Weekly, and Drug Therapy, and editor-in-chief at Emergency Medicine magazine; and published numerous papers in peer-reviewed academic journals, including Bulletin of Mathematical Biophysics, Psychoanalytic Quarterly, the Journal of Theoretical Biology, and more.

Robert Bernhard's 40-year+ career in the sciences includes working at Harvard's Computational Laboratory, MIT's Instrumentation Lab, The Monrobot Laboratory, the ITT (International Telephone and Telegraph) labs, the Grumman Aircraft Research Department, the Molecular Biology Department at the Albert Einstein College of Medicine in New York, and the Medical Education Division at Excerpta Medica (a division of Elsevier). He has worked as editor at IEEE Spectrum, Nucleonics Weekly, and Drug Therapy, and editor-in-chief at Emergency Medicine magazine. He has published numerous papers in peer-reviewed academic journals, including "Correlation Waves in Brain-Like Structures" (Bulletin of Mathematical Biophysics), "Chemical Homologue of Freud's Model" (Psychoanalytic Quarterly), "A Kinetic Model of Memory" and "Irreversible Thermodynamics in Biology" (Journal of Theoretical Biology), and "Adrenoreceptors and the Anxiolytic Effects of Risperidone (The AMA Journal of Neuroscience and Neuropsychiatry). He received the 1980 Communicator of the Year Award from the Institute of Electrical and Electronics Engineers, published two novels, a short computer networking textbook, and played Crimson Tide football (both ways) from 1950–1952.
· · ·He has lectured on software simulations of neoronal networks in the brain, artificially intelligent neural nets, and applications of quantum mechanics methods in neuroscience at the University of Pittsburgh School of Medicine, the Johnson Research Foundation of the University of Pennsylvania, the International Federation of Information Processing Societies Congress (Munich, 1964), the Conference on Engineering in Biology (Chicago), and Queens College of the City University of New York.
· · ·He is listed in American Men of Science (Cattel), and The Bioelectronics Directory (Texas Christian University).

You have subscribed to alerts for Robert Bernhard.

You have been added to Robert Bernhard's favorite list.

You can also sign-up to receive email notifications whenever Robert Bernhard releases a new book.