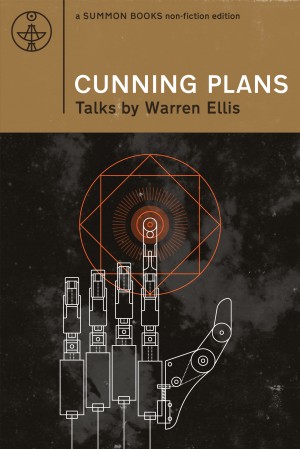 By Warren Ellis
Cunning Plans collects several of NYT-bestselling author Warren Ellis' lectures on the nature of the haunted future and the secrets of deep history, given in recent years at events in London, New York, Los Angeles and Berlin.
Available ebook formats: epub
Price: $1.99 USD
Buy Add to Library Give as a Gift
How gifting works
Create Widget
Tags: warren ellis
About Warren Ellis

Warren Ellis is the award-winning writer of graphic novels like TRANSMETROPOLITAN, FELL, MINISTRY OF SPACE and PLANETARY, and the author of the NYT-bestselling GUN MACHINE (being adapted for TV by Microsoft Xbox) and the "underground classic" novel CROOKED LITTLE VEIN. The movie RED is based on his graphic novel of the same name, its sequel having been released in summer 2013. His GRAVEL books are in development for film at Legendary Pictures. IRON MAN 3 is based on his Marvel Comics graphic novel IRON MAN: EXTREMIS. He's also written extensively for VICE, WIRED UK and Reuters on technological and cultural matters. Warren Ellis is currently working on a non-fiction book about the future of the city for Farrar Giroux Straus.

You have subscribed to Smashwords Alerts new release notifications for Warren Ellis.

You have been added to Warren Ellis's favorite list.

You can also sign-up to receive email notifications whenever Warren Ellis releases a new book.