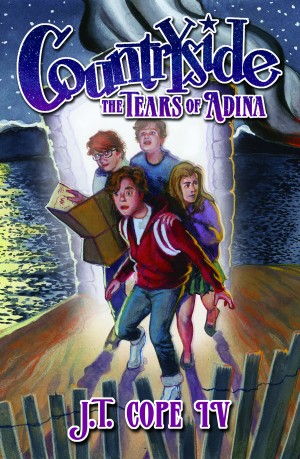 Countryside: The Tears of Adina

When Luke returns, he finds that much has changed. Mischievous gnomes are spreading chaos across the valley, a lone wolf haunts the forests, and Mayeem, one of Luke’s new teachers, just happens to be a mermaid. And then there’s the hunter, a man with golden eyes, only part of a soul and the belief that Luke has hidden something he wants—something he’s willing to destroy Countryside in order to get.

Hounded by blackhearted men and soulless creatures and with darkness luring him in, Luke must gather his wits and ferret out his true friends. But as he draws close to finding what it is the hunter seeks, he will learn that there is more at stake than he understands. He’ll learn that it’s not the hunter he should be afraid of and that, once done, some things cannot be undone.

J.T. Cope IV was born in Texas, and grew up in the small farming community of Wheelock, living on land that had been in the family for over a century. In 2002 J.T. graduated from Centenary College of Louisiana with a bachelor's degree in physics. This college was also where J.T. met his beautiful wife, Katie. He joined the United States Marine Corps in January 2003 and was married to Katie in July of that same year. In 2006 he returned from Iraq and in a small table in the back of a local coffee shop, on a cold (about 78 degrees for Hawaii) and rainy day took down the first notes and ideas for his Countryside Series. In November 2006, J.T and Katie moved back to Fort Worth, Texas where J.T. pursued a master's in geology at The University of Texas in Arlington. As a geologist, J.T. spent much of his time visiting drilling rigs, and picking through rocks brought up form two miles below the surface. However, this time allowed J.T. the opportunity he needed for his book, Countryside, to grow. Over the next two years, Countryside received the love and attention it needed in order to turn into the book it is today.

You have subscribed to alerts for J.T. Cope IV.

You have been added to J.T. Cope IV's favorite list.

You can also sign-up to receive email notifications whenever J.T. Cope IV releases a new book.