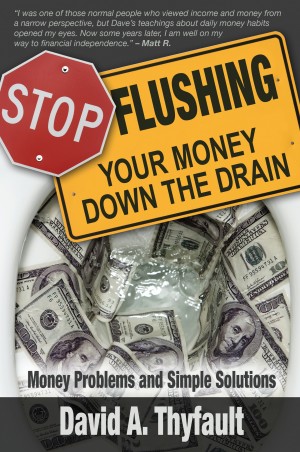 Stop Flushing Your Money Down the Drain

By David Thyfault
This multi-award winning book reveals how and why the average person loses nearly $465,000 in buying power in his or her life time - usually without even knowing it. More importantly it shows you how to avoid the same plight. It’s broken into three interesting sections, including The Worst Things On Which We Waste Our Money. If you always have more month than money, you need this enjoyable book. More
“The primary difference between rich people and poor people
is that rich people have more money.” – Dave Thyfault

You may not aspire to become a millionaire, but wouldn’t it be nice to end up better off than 97% of our citizens, who depend on others for their retirement in one way or the other? Wouldn’t it be nice to live a better life along the way? Wouldn’t it be nice to do all of that without taking advantage of others or having to get a part-time job, or having to invest a fortune in time or money?
This is the type of information that this book offers you. In addition, you will find out that nearly everybody, including you, can have an extra half-million dollars at retirement. You don’t have to get another job and you don’t have to make big sacrifices. All you have to do is learn how to better utilize the money you make right now.
Once you understand what it takes to accumulate income and net worth, you might even find out what it takes to make that first million. In fact, there are millions of millionaires in America right now and it is not really all that difficult to become one. If you want to avoid suffering through the pain and discomfort of total financial collapse, you should read this book.

If you are Bill Gates, Donald Trump, or Warren Buffet, you are excused.

Note: If you obtain this book for free and like it, the author would appreciate you dropping back by and leaving a Review for the benefit of others.
Download: epub mobi (Kindle) pdf more Online Reader
rtf lrf pdb txt
Price: Free! USD
Add to Library
Create Widget
Tags: investment personal finance finance estate planning economics budgeting
About David Thyfault

Like most Americans I liked my career of several decades but I have to admit that I didn’t always approach themornings with wild enthusiasm.But then, I retired and discovered something I never would have guessed: When the day is mine, I love to get up even earlier. Now I’m the guy who wakes up the rooster. I still work as much as I ever did, only I now work on things that bring me a different form of compensation. Like writing books.

Some have asked me where I get my ideas, but it’s no mystery. I had a storied youth with six sisters and a wild family. When I wasn’t engulfed in that world, I spent a fair amount of my time wandering the alleys and streets of our neighborhood. A fellow learns a lot from all of those people even before he arrives for his first day of school. If he has the ability to recall the characters and the activities in which they engaged, and blend that with a dash of make-believe, there’s a goldmine full of fodder from which to draw his inspiration.

You have subscribed to alerts for David Thyfault.

You have been added to David Thyfault's favorite list.

You can also sign-up to receive email notifications whenever David Thyfault releases a new book.