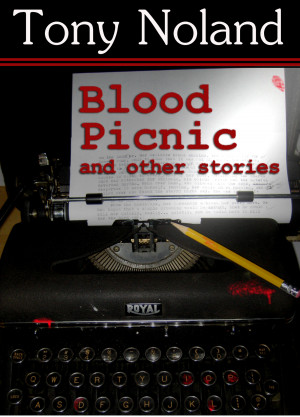 Blood Picnic and other stories

*When the god of love is furious, you’d better hope it’s not you he’s gunning for.

*The most powerful magic ring in the world is defeated… by bad dental work.

*A preacher’s sermon will soften the heart of anyone except the one person who matters most.

*The funniest man in the world is asked to reveal his secret, with deadly consequences.

*A midlist author finally has a runaway bestseller. Too bad that’s the *last* thing he wanted.

I'm a writer, poet and blogger living in the suburbs of Philadelphia, PA. My writing is funny, sad or exciting, depending on how much coffee I've had. I own a lot of power tools, a few firearms and so many books that I've given up counting them. I now measure them by the linear foot.

Reviews of Blood Picnic and other stories by Tony Noland

Lots of bite-sized fiction with a lot of taste! I thought this book was wonderfully done, from the cover art to the content inside. I've followed Mr. Noland's flash through #FridayFlash on Twitter, and I was pleasantly surprised to find so many of my favorite stories within these pages. He truly has a gift.

I switched between reading this book on my original Nook device and the Nook app on my Android phone, and was pleased with the ease of the transition. All the chapter/short story links worked beautifully; the text was crisp, easy to read, and flowed smoothly. Overall, this was one of my most enjoyable reading experiences. With the small caveat that many tales may not be suitable for younger audiences due to subject matter, I highly recommend this book.

My own personal favourites are the superhero tale, "Grey Ghost Gone"; "Straight and True, my arrow, Fly", in which a pair of lovers discover the difference between love and lust; "Aspirations", in which the extent of a young man's insecurities are laid bare; "Ridi, Pagliaccio", in which a fading star tells a chilling story; "Long Story", in which a desperate man tests the strength of duct tape; and "Reconciliation", in which a penitent man tries to rejoin his family. The themes are varied and the endings are both happy and sad, but the strength of storytelling is self-evident, and the stories are clearly the work of a talented writer.

I had the privilege of seeing this anthology in its original form, and it's my absolute pleasure to be able to review the finished article. I can't stress enough how enjoyable these stories are, with their intelligent plotting and deft wordplay. Tony has a vivid imagination and a true mastery of the written word, and I guarantee you'll find something to love in this collection.

I admit I started reading "Blood Picnic" with a preconceived notion: that a book of less than 30,000 words would be a quick read, something I could knock off in an evening. It took much longer to finish, even though it held my interest all the way through.

Synopsis: Tony Noland is a regular participant in #FridayFlash on Twitter, and "Blood Picnic" is a collection of 28 of Tony's flash (1000 words or less) pieces. He helpfully groups them by genre: fantasy, literary, horror, and magical realism.

Storytelling: five stars. Tony packs a lot of story into a flash, and there's 28 of them. I bought this book wishing he'd made it longer, but the stories are well worth reading. I'm one of those people who likes the "peek behind the curtain," so an introduction — maybe at the beginning of each genre section — would have been a nice plus.

Writing: five stars. Tony's a versatile storyteller, and does a great job of making his writing voice fit the story.

Editing: four stars. There's a few typos, but Tony says "perfection is the goal." He has already re-released "Blood Picnic" after making corrections. This is one of the better-edited indie works. I'd like the story titles to have a "section break" to start at the top of a page, is the only formatting issue I saw.

Summary: This one's worth your time. Tony put a lot of work into making it the best he could.

(reviewed 39 days after purchase)
Tony McFadden reviewed on May 4, 2011

Well, Tony has served up a meal of little bits of excellence. I loved reading the short, short shorts, but was (very) frequently frustrated that it was over too quickly.

Paranormal, horror, fantasy, and a melding of all three genres should keep you awake at night.
Maybe because you can't stop reading. But maybe because you can't get the image of "[f]rom behind the head of it, two long yellow fangs flashed out, then arced forward convulsively to bury themselves in her wrist" out of your head

A novel from Tony is needed, with bigger bites and more of the above. Heartily recommended.

You have subscribed to alerts for Tony Noland.

You have been added to Tony Noland's favorite list.

You can also sign-up to receive email notifications whenever Tony Noland releases a new book.