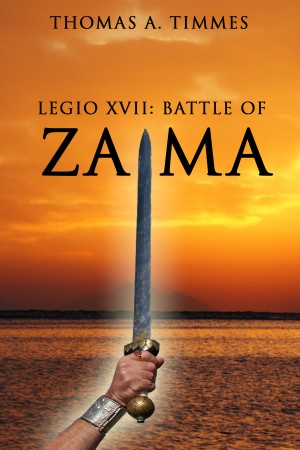 By Thomas A. Timmes
The Legio XVII series, Roman Legion at War, Battle of the Danube, and Battle of Zama are historical fiction novels that take place during Rome’s Second Punic War with Carthage (218 - 202 BC). Readers are immersed in battlefield clashes, innovative tactics, strategic planning, and inspiring leadership. More
Legio XVII Series, Book 3 (historical fiction): Following Scipio’s victory at Ilipa, Spain in 206 BC, Mago Barca, Hannibal’s brother, sails with his army to the northern Italian port of Genoa in 205, to attempt to do what his brother Hasdrubal failed to do in 207: reinforce the embattled Hannibal. Mago recruits mercenaries from as far away as Illyria (modern Albania) and Posonium (modern Slovakia). Praetor Manius Tullus leads Legiones XVII and V Etrusci to Verona to prevent the mercenaries from joining Mago and fights them at the Battle of Lake Benacus. Scipio arrives in Africa in 204 BC and fights two decisive battles. Under intense pressure from Carthage, Mago engages the veteran Legionaries blocking his way south. Carthage recalls Hannibal from Italy and sets the stage for the Battle of Zama between the two greatest generals of the 2nd Punic War. A last minute appeal from Scipio draws Manius and his two Legions to Africa to block Numidian cavalry from joining Hannibal. The fictional exploits of Legio XVII are impacted by the Punic War and its military operations are conducted in support of the overall war effort, but do not intrude into or alter actual historical events. Together, the three books present a complete summary of that ancient War.

Thomas A. Timmes, a 28 year active duty veteran of the U.S. Army, holds the Bronze Star for Valor and Vietnamese Cross of Gallantry for combat in Vietnam. He served with the 3rd and 8th Mechanized Infantry Divisions in Germany during the Cold War as an Infantry Platoon Leader, Company Commander, and Battalion and Brigade Operations Officer. Tom has extensive experience with Military Psychological Operations as a Team Leader, an Executive Officer, and Battalion Commander of an airborne unit. Tom also served on the Department of the Army Staff and the Joint Staff in the Pentagon. After retiring as a Colonel, Tom joined the Office of the Secretary of Defense and was involved with the planning, deployment, and execution of numerous overseas military operations. He worked in the Department of Defense for 42 years including 24 years in the Pentagon. Tom earned military and civilian awards including the Medal for Exceptional Civilian Service, the Defense Superior Service Medal, Combat Infantryman’s Badge, holds a Master’s Degree in History, and is a member of the National History Honor Society. In 2013, he was designated a Distinguished Member of the Psychological Operations Regiment. Tom is married and has five children and nine grandchildren.

Learn more about Thomas A. Timmes

About the Series: Legio XVII

Manius Tullus rises through the ranks from Legionary to Centurion to Praetor to Proconsul as he leads Legio XVII and other Roman Legions into northern Italy, Austria, and Germania. Eventually, he joins Scipio Africanus in Spain and north Africa and participates in the Battle of Zama and the end of Hannibal. 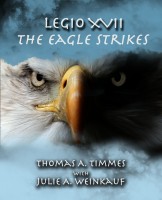 You have subscribed to alerts for Thomas A. Timmes.

You have been added to Thomas A. Timmes's favorite list.

You can also sign-up to receive email notifications whenever Thomas A. Timmes releases a new book.