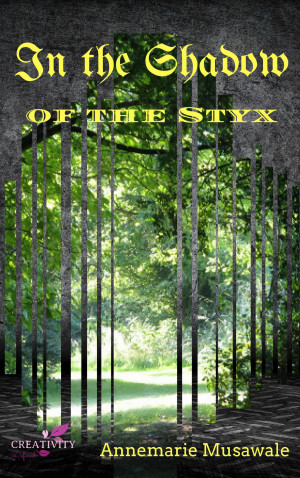 In the Shadow of the Styx

By Annemarie Musawale
Rated 4.00/5 based on 2 reviews
Life is short; Phil and Lillian learn that the hard way. When they find themselves standing beside their dead bodies, wondering what the fuck happened. And then...nothing happens. No light at the end of the tunnel, no avenging angel or creepy reaper comes calling. Its disconcerting, what are a couple of disenfranchised ghosts to do? Well, that is indeed the question. More
What happens after we die? A vindictive ex-girlfriend (maybe, who knows?) is responsible for the death of happy lovers; Phil and Lillian. One minute they're celebrating the possibility of a long life together, the next they're contemplating eternity in the hospital where they die. Shenanigans ensue as they try to fit in with post-death society. What are the norms, who makes the rules and who can they ask about being taken to the leader. Can they still love each other and remain lovers in this brave new non-world? These are just some of the questions that Phil and Lillian are confronted with. Oh if only they'd appreciated contemplating their navels more when they were alive! Now there's no choice, danger approaches and they must be in with the right people before it comes...or else.
Available ebook formats: epub mobi pdf lrf pdb txt html
First 10% Sample: epub mobi (Kindle) lrf more Online Reader
pdb
Price: $1.99 USD
Buy Add to Library Give as a Gift
How gifting works
Create Widget
Tags: romance ghosts death magic legends witches afterlife myths lore supernatural creatures
About Annemarie Musawale

Annemarie lives and works in Nairobi Kenya. She's a prolific watcher and reader of books and series that deal with the supernatural as a whole. She works at home, ghost writing as well as writing, marketing and generally trolling her books online. She has one son who she's attempting to grow without severely traumatising him. It's a work in progress.

Reviews of In the Shadow of the Styx by Annemarie Musawale

Overall, I was very much impressed with this book, and I've certainly never read anything else with a heroine like Lillian. There seems to be a trend for generic, sanitized heroines in fantasy literature at the moment, so Lillian, with her accent, sensuality and self-possession, was refreshing. Phil and Lillian settle into their new lives somewhat, despite the extraordinary circumstances, but it's done with no fuss, allowing Musawale to pull it off.
I found the writing style somewhat strange; a gravitation between dialect and description, which, while certainly vivid, was occasionally elegant to the point of incongruity. The ambiguity of the ending did appeal to me, however, and left the door open for the sequel.
The diversity of the world Musawale has created within the hospital is wonderful. French eccentrics mingle with scrappy, dead-before-their-time boys and men in sharp suits. Each character is lingered over just long enough to establish their quirks and get back to the pivot, which, of course, is Phil and Lillian.
Some of the phrasing was clunky, with a sentence here and there that could have been worded with a little more precision. On the other hand, Musawale clearly has a knack for word-painting. The snowglobe world of the hospital is fully realised and three-dimensional; the only elements of it that are neglected, paper-thin, are, ironically, the people who remain alive.
Something else I appreciated was that each character had a distinct voice of their own. It's all too common for books to contain conversations where the speaker is not indicated, or only indicated to a point, and after a while it becomes impossible to tell which thread of the conversation belongs to whom; not so with Between Death And Heaven. It's clear, whether indicated or no, which character is speaking, because all of them- every single one- have accents, tics, or quirks of speech- citing Lillian's London accent as the most significant.
Then there's the mythology, which draws on various other cultures, just as with the characters. There's a Charon figure, suggesting Greek roots, and, if I remember rightly, a few elements of Norse in there too, helping enrich the plot, which is mainly personal.
Overall I found Between Death And Heaven a very enjoyable read, with a few bittersweet emotional moments, unique and likeable protagonists, and shades of ambiguity. I'd recommend it.

Between Death and Heaven is a paranormal novel tackling the afterlife. Phil and Lillian find themselves in a new world when they end up in the hospital after having severe food poisoning. In this new world, the are ghosts without a clear path as to where the should go, who they should be, certainly what they were doesn’t matter so much anymore.

Lillian is eager to break through the barriers she and Phil face, and her courage sends them on a wild adventure to deliver an important message. Well, it’s certainly a challenge, consider these two are dead, and therefore they are ghosts. The use of cell phones, email, all manner of technology becomes obsolete. But not to worry, Musawale writes a great solution. Plunging the reader into dramatic plots to obtain ingredients for spells, and witches who know it all.

Between Death and Heaven has an innocent charm to it, even while tackling heavy issues like revenge and murder. The fact that the afterlife is unknown allows Musawale to take advantage of imagination and create a world that manages to captivate.

The novel does introduce an array of characters, each one playing a role in Lillian and Phil’s adventure. Each one with a mysterious background, or a legacy they can’t control or escape. One thing’s for sure, the afterlife in Between Death and Heaven is not what you expect when you imagine death.

My only complaint was that it took a bit of getting used to Lillian’s lingo. I understand Musawale was staying true to Lillian’s roots, and after a while, reading got easier, and I expected it from Lillian. This is an interesting complaint, as it really depends on the reader’s preference. Lillian does turn out to be a strong, young woman who loved a man enough to make a dramatic change in her life. I liked her for that, and her amusing perspective on people and life in general.

You have subscribed to Smashwords Alerts new release notifications for Annemarie Musawale.

You have been added to Annemarie Musawale's favorite list.

You can also sign-up to receive email notifications whenever Annemarie Musawale releases a new book.