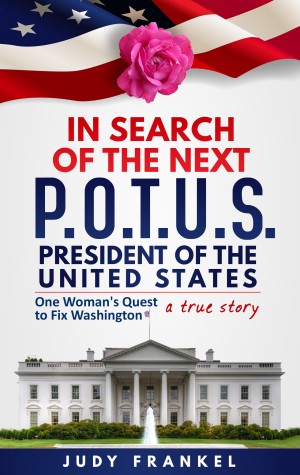 In Search of the Next POTUS (President of the United States): One Woman's Quest to Fix Washington, a True Story

By Judy Frankel
In Search of the Next POTUS (President of the United States) tackles the seemingly impossible task of making Congress work. In this true adventure, political activist Judy Frankel shows how to combat corruption in Congress while choosing a qualified leader for the White House. Her humorous and heartbreaking crusade to overhaul Washington from the top down inspires voters to take control of the USA More
Master gardener, tree pruner, revolutionary. An unlikely heroine who discovers a little-known fact that will protect the country's food supply, even in severe weather. But to make it work, she needs to reach the President of the United States.

Part personal journey, part call to action, In Search of the Next POTUS (President of the United States) tackles the seemingly impossible task of making government responsive to the urgent needs of Americans. In this true adventure, political activist Judy Frankel shows how to combat corruption in Congress while choosing a qualified leader for the White House. Her humorous and heartbreaking crusade to overhaul Washington from the top down navigates the pitfalls of being a David in Goliath's world.

Frankel illuminates today's unpublicized political landscape to reveal a six-point plan that is gaining momentum in grassroots groups across the United States. Without having to wait for Congress to get their act together, In Search of the Next POTUS gives voters the power to fix the U.S. government for good.

Join Judy's impassioned battle to safeguard our future. Regardless of party affiliation, In Search of the Next POTUS should be mandatory reading before the 2016 election.

"The author is upbeat and offers positive solutions to problems that can seem disheartening and overwhelming. At the end of In Search of the Next POTUS, the reader will truly feel that even though the choking ivy of special-interest money has grown deep over our representational democracy, if we work together, we can clear root and branch, [and] restore our productive nation."

"By including her own personal experiences the book reads like a novel, which was so great."

– Susan Durik, Author, How You Can Fight Human Trafficking

"If you're overwhelmed by the bleak political, social, environmental and financial picture our country has gotten itself into, you may have given up hope. Do yourself a favor and get this book ASAP!"

"Even if you're apolitical, you will enjoy her adventures as she learns the ins and outs of our political quagmire. You will share her sense of empowerment when she determines that change is possible and develops the framework for accomplishing this monumental task."

"I was literally tearing up as I read the last few chapters. What a powerful vision for us to rally around!"

Judy Frankel is a Master Gardener in California and the mother of a special needs child. Prior to the 2012 elections, Judy designed a website called Writeindependent.org to change the way candidates campaign for federal office and developed a strategy for removing the influence of big money on government.

A spirited entrepreneur, Frankel started several businesses over the past 30 years, including a bicycle messenger service, physical therapy clinic, and edible landscape company.

Frankel blogs extensively about political hot button topics such as fracking; war; rigged voting machines; voter suppression; and the Trans Pacific Partnership, a frightening trade bill. She became the first person in the USA to run presidential debates through Skype, which can be viewed on YouTube, Vimeo, and CNN’s iReport.

Concerned about the future of food, Frankel writes about GMO’s, Roundup (glyphosate) and “terminator” seeds. She pinpointed presidential appointees and political campaign contributions as the main causes of unhealthy agricultural policy.

Frankel speaks to audiences about food security, the effects of herbicides on our health, and sensible, effective political reforms. She is an activist with Wolf PAC, working to pass a 28th Amendment to overturn Citizens United v FEC.

Frankel has developed a large web presence with many YouTube videos related to both politics and agriculture. Arianna Huffington requested that she become a blogger for the Huffington Post.

With In Search of the Next POTUS: One Woman’s Quest to Fix Washington, Frankel hopes to focus political will by spreading vital information about current activist trends that are helping people feel more in control and exhilarated about the future.

You have subscribed to alerts for Judy Frankel.

You have been added to Judy Frankel's favorite list.

You can also sign-up to receive email notifications whenever Judy Frankel releases a new book.