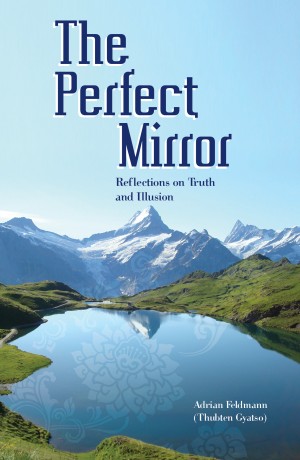 The Perfect Mirror: Reflections on Truth and Illusion

By Venerable Adrian Feldmann
In these short, profound articles, Venerable Adrian Feldmann explains the principal teachings of the Buddha and reflects on the search for a truthful way of life, the pursuit of happiness, birth, death, love, friendship, sex, marriage, and raising children. This ebook is published by the Lama Yeshe Wisdom Archive, a non-profit organization established to make Buddhist teachings widely available. More
When Adrian Feldmann, an Australian doctor, discovered Tibetan Buddhism in Nepal in the 1970s, he began a journey that culminated in him becoming a Buddhist monk (Thubten Gyatso) - the one thing he was sure he didn't want to be at the outset.

In these short, profound articles, Venerable Gyatso explains the principal teachings of the Buddha and reflects on the search for a truthful way of life, the pursuit of happiness, birth, death, love, friendship, sex, marriage, and raising children. Written from the ancient Buddhist country of Mongolia where Venerable Gyatso was teaching, these pithy reflections explore how we can turn the pursuit of happiness into a lived philosophy. Peppered throughout are entertaining and astounding true stories from Venerable Gyatso's life - whether from the Mongolian steppes or in the Australian suburbs - stories of ghosts in the Nepalese mountains, the mysterious appearance of western-style breakfasts in a remote monastery in the Himalayas, and how his first parachute jump was excellent preparation for realizing the sky-like nature of the "emptiness" of all things.

This ebook was published by the Lama Yeshe Wisdom Archive, a non-profit organization established to make the Buddhist teachings of Lama Yeshe and Lama Zopa Rinpoche freely accessible in many ways, including on our website for instant reading, listening or downloading, and as printed, audio and ebooks. Our website offers immediate access to thousands of pages of teachings and hundreds of audio recordings by some of the greatest lamas of our time. Our photo gallery and our ever-popular books are also freely accessible there. Please find out how to become a supporter of the Archive and see all we have to offer by visiting the Lama Yeshe Wisdom Archive website. Thank you so much and we hope you enjoy this ebook.
Available ebook formats: epub mobi pdf rtf lrf pdb txt html
First 20% Sample: epub mobi (Kindle) lrf more Online Reader
pdb
Price: $0.99 USD
Buy Add to Library Give as a Gift
How gifting works
Create Widget
Tags: buddhist essays buddhist practice lama zopa rinpoche lama yeshe buddhist teachings buddhist practice commentary
About Venerable Adrian Feldmann

Born in Melbourne, Australia, in 1943, Dr Adrian Feldmann graduated from the University of Melbourne with a degree in medicine. After practising medicine in Australia and England, he travelled through Afghanistan, Pakistan, and India, eventually finding his way to a Tibetan monastery in Nepal.

After intensive study and meditation, he became ordained as the Buddhist monk, Thubten Gyatso. Since then he has run a free medical clinic in Nepal, taught Buddhism and meditation in many countries, and established monasteries in France and in the country town of Bendigo, outside Melbourne.

In 1999, he was asked by his teacher, Kyabje Thubten Zopa Rinpoche, to go to Mongolia and help establish a new Buddhist centre. Mongolia was emerging from seventy years of communist rule, during which the Stalinist purges of the 1930s virtually extinguished the traditional Mongolian Buddhist culture. He was well received in Mongolia where, apart from the classes he gave at the new centre, his teachings were presented on radio and television and published in the local newspapers.

23,000 copies of the Mongolian translation of the first edition of this book have been distributed, mostly free of charge, and it has become one of the most popular books on Buddhism in Mongolia. After leaving Mongolia in 2003, Thubten Gyatso built a cabin in the Australian bush where he meditated in strict isolation from the world for three years.

Reviews of The Perfect Mirror: Reflections on Truth and Illusion by Venerable Adrian Feldmann

You have subscribed to Smashwords Alerts new release notifications for Venerable Adrian Feldmann.

You have been added to Venerable Adrian Feldmann's favorite list.

You can also sign-up to receive email notifications whenever Venerable Adrian Feldmann releases a new book.