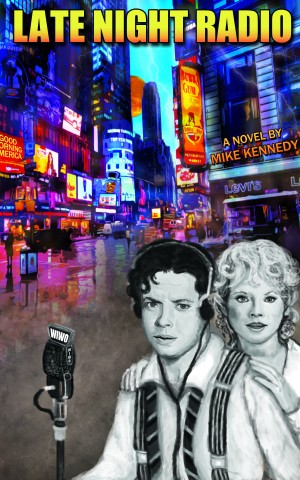 By Mike Kennedy
In a world connected by more than we know, why don’t we remember Orson Wells broadcasting from lower Manhattan only yesterday? Why do we remember him from the age of radio and movies in the ‘30’s and ‘40’s? And why don’t we call this place New York City any longer? More
Time traveler Orson Welles leaves our present day for the 1930's and has the career that today we know him by. But how come we don't remember him broadcasting in Manhattan in 2018? And how else has history changed that we've lost track of? And why don't we call this place New York City any longer?

The year is 1641. The Dutch Republic has claimed the Hudson, inventing wampum as currency for the beaver trade. Market forces unleash the dark side of the fearsome Five Nations of the Iroquois. The forest explodes, depopulating the Ohio Valley. Amid the mayhem, one certain murder, one very particular murder, cosseted among the various brittle parchments at the New York Historical Society, is interrupted. Because of this, we soon will not call this place New York City any longer.

July 4th 1939 celebrated storyteller Orson Welles reconstructs events for the Associated Press with a frame tale of Manhattan, melding ages past with those to come, a synergy of voice and concept braiding the method of Poe with those of Heinlein and Phillip K Dick.

In a few days, the statue on the plaza will depict someone else besides the general who shelled Atlanta. New York City's historical record of 1641 tells us of a Weckquaesgeek’s murder of revenge at Turtle Bay on Dutch Manhatta. Somehow, the Indian must be allowed his murder and the Dutchman Switts must die.

FICTION FOR THE SPOKEN WORD – Full length recordings of contemporary American short stories by Mike Kennedy – Paste this link into your browser >>> https://www.youtube.com/channel/UCMX-gWZQGvdo9xovZTl-ZOA

Indianapolis author Mike Kennedy described by Trident Media Group, saying: Kennedy has a way with words and that readers attracted to Hemingway and Mailer will love Season of Many Thirsts (A novel brought to E-Books under the original title: REPORT FROM MALI). Publisher Alfred A. Knopf says of the manuscript: "This is a potentially important and significant novel on many levels, including formally." Little, Brown says of the novel: "Our admiration for its ambition and the energy and high-octane force it applies toward these engrossing geopolitical events. Chance and his team are memorable characters." Random House says: "Kennedy captures the strange, and intriguing world of Mali." Playwright Arthur Miller said of Kennedy: "Marilyn and I used to think there was something funny about Mike, and then we realized that he was simply hilarious."

Kennedy's message to the publishing world, "I have read Joseph Conrad’s Heart of Darkness from time to time across fifty years. During this, my most recent reading, it occurs to me that I am Kurtz and that all of you are Marlow. Kurtz lay dying in the pilot house of the river steamer. Marlow, the company agent, has found him and returns with him. Kurtz has spent years in the jungle pulling out ivory and sending it downstream. Finally, Kurtz agrees to return down river to civilization because he realizes that he has something to say, something with a value beyond his ton of treasure. Kurtz realizes that he has achieved a synthesis from out of his brutish experience. Kurtz imagines being met by representatives at each one of the string of railway stations during his return to civilization. He tells Marlow, 'You show them you have in you something that is really profitable, and then there will be no limits to the recognition of your ability.' And then, sounding as though he steps into our own millennium, Kurtz adds, 'Of course you must take care of the motives—right motives—always.' Now I see that Kurtz is Conrad. Kurtz is not unique. He is every writer. It is only Marlow, the agent, who is unique, unique in his fidelity, not just to the job, nor only to the company, but to the civilization that sent him.

JEAN SHEPHERD ON WOR RADIO
SHEP ON THE AIR

FINAL CHAPTER OF THE NOVEL: ONE FINE DAY
THE CHIFFONS....1963

ORSON WELLES ON HEMINGWAY
Orson mentions keeping Hemingway company in the duck blinds outside Venice, Italy. This will remind readers of Hemingway's final, finished novel (Across the River...).

You have subscribed to alerts for Mike Kennedy.

You have been added to Mike Kennedy's favorite list.

You can also sign-up to receive email notifications whenever Mike Kennedy releases a new book.