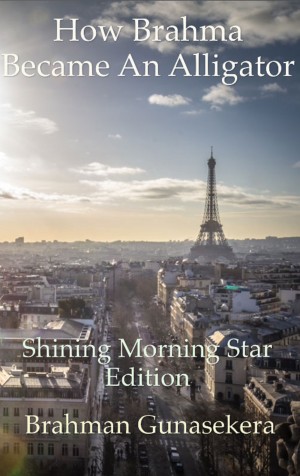 How Brahma Became an Alligator

By Sawan Gunasekera
The Telling of the ancient sacred precious stones of the Maha Ganges and stupendous struggle and battles in the great heavens among Devas and Great Deva Kings against one another and against Brahma the Great Auspicious Maha Brahma Brahma Harita are described in this vivid drama that tells the story of the Asuras and people of Puriyaya, an Ancient Great India. More
The coupon code for this holy sacred text is SN88F

Brahman Gunasekera perfected the Holy Life that He was ordained in by His Excellency Enlightened. Having studied under tutelage of Lord Padamuttara Enlightened, he sought the going forth into the permanent heavens as a Bodhissatva. Having been consecrated as Holy Bodhissatva and Mahassatva of Jhambudeepa the Golden Apple Land, and the Rose Apple Isle, He Perfected Happiness into fruition and experienced the Supreme Bliss. He earned the Holy Rat Heaven, Holy White Rabbit Heaven, Holy Gorilla Heaven, the Secluded Rovera Heaven, and numerous other heavens. Venerating Gautama the Enlightened and Conqueror as a youth, he Perfected His European Historical Studies into a 5 on the A.P Historical Examination finished international baccalaureate studies at his alma mater at Bernards High at the Holy Interval of the Year 2,600. He practiced religious studies diligently into full perfection while pursuing an English major at the Pennsylvania State University, during a period of racist oppression by the dissatisfied and unhappy European American populace that had created a backlash throughout the region and in the college town of Kammasadhamma, due to the cultural clash between historical events in governance and white supremacy. His Sacred Excellency Brahman Gunasekera defeated his enemies that reviled him regardless of his pious holy caste in a cold war over racism and strong, powerful anti indo Aryan sentiments, some off which are so vehemently opposed in the ongoing and abating crisis of the holy caste in the Tristate area in the United States, that acting on them involve the lack of acknowledging the holy caste's purity, or its height, and existence, that it was as though they were poisoned against the holy caste of piety and purity, and even went to lengths of labeling pious holy men as outcastes, heretics, from the lower castes of Brahma, or by skin!. His Sacred Excellency Brahman Gunasekera defeated those cursed devils, by resorting to his Holy Faith, and the sacred act of giving holy engagements of marriages with the aryan crowning of flowers, flowers that were gifted and crowned upon the beloved and loyal women, girls and young girls. Thus did His Sacred Excellency easily completely defeat those blasphemous, impious persons. His other accomplishments are the highest, and source of satisfaction tasted, well. Having learned the kasina meditations in numerous ways and from Buddhist Scholars and Bhikkhus, he perfected his satisfaction in reference to these meditations surpassing loving kindess and asubha bhavana. Honing his skills while travelling to and from school, he purified his mind, through the keen even gazing upon pure white snow. His profile remains a clear instance where the claims that the psychic strains attributed to kasina meditations including psychological illness, were investigated thoroughly by various methods of training and verified as entirely wholly false, inaccurate, incorrect, and erroneous, specious. Tied with the sacred bliss of Lankadeepa and its deep heritage, though perhaps a source of controversy due to religious extremism and jealousy, instead kasina meditations were blissful, transparent and problem and hassle free for the experienced yogin with secluded and concentrated mind. His Sacred Excellency Brahman Gunasekera attained the purest perfection while meditating upon the water kasina flowing down river in his hometown of Bedminster, Jhambudeepa of the Rose Isle under the guidance of Lord Padamuttara Enlightened, Pious Deva, Deva Pious, and attained manifold supramundane perfections repeatedly while meditating upon kasinas. Having defeated Mara the Evil One in Sword Combat in the supramundane shining year of 2,600 He Awakened to Brahma. He currently lives well apart from others, continuing the sacred practices of the holy life in seclusion, with Lord Padamuttara Enlightened, awaiting admission into the heavenly worlds, forever.
So may it be praised, may it be written, may it be done. May you enjoy perfect blessings for many kulpas and experience the perfect fruition of happiness, nirvwana.
With utmost sincerity,
Brahman Gunasekera

You have subscribed to alerts for Sawan Gunasekera.

You have been added to Sawan Gunasekera's favorite list.

You can also sign-up to receive email notifications whenever Sawan Gunasekera releases a new book.