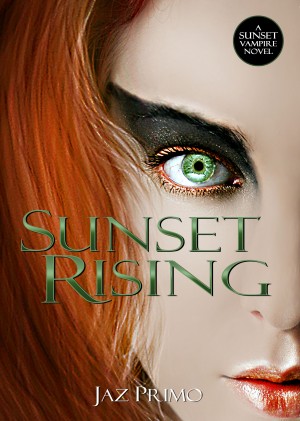 Vowing retribution, Katrina tenaciously seeks out those behind the attack against Caleb.

Mounting challenges prey upon Caleb, creating a crisis of conviction that unravels his world.

Paige’s conflicted feelings erupt, altering the lives of those she loves and leaving emotional disaster in her wake.

Jaz's extremely popular Sunset Vampire Series (consisting thus far of Sunrise at Sunset, A Bloody London Sunset, Summit at Sunset, and Wicked Sunset) was third-place winner of the Paranormal Romance Guild's Reviewer's Choice Award Best Paranormal Series in 2012. The fifth book in the series, Sunset Rising, should be released in 2015.

Bringer of Fire is the first volume in Jaz's new Logan Bringer urban fantasy series. In Bringer of Fire, an army veteran manifests telekinetic powers only to confront corporate and governmental cover-ups, as well as threats from a clandestine terrorist organization. The world quickly discovers that one man’s powers could change the course of humankind.

Also in Series: The Sunset Vampires

You have subscribed to alerts for Jaz Primo.

You have been added to Jaz Primo's favorite list.

You can also sign-up to receive email notifications whenever Jaz Primo releases a new book.