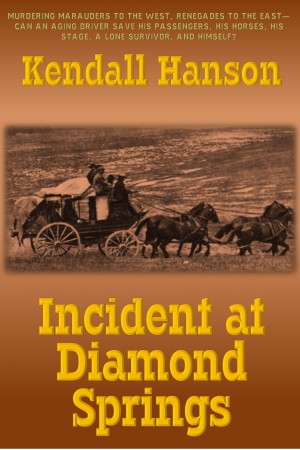 By Kendall Hanson
When his stagecoach is caught between an outlaw militia and a band of renegades, a veteran driver must figure out how to save his passengers and the lone survivor of a massacred way station.
Download: epub
Price: Free! USD
Add to Library
Create Widget
Tags: westerns western fiction western adventure western ebook western short story westernshortstory western civil war western literarature action western action adventure
About Kendall Hanson

Kendall Hanson is a former feature writer, columnist, magazine and newspaper editor, and teacher. He began his book career in 1999 with the publication of Writing for Trade Magazines. Drawing on a long-time hobby of book collecting, he subsequently launched a reprint publishing how dedicated to the preservation of hard to find titles on boatbuilding, sailing, and adventure.

A transplanted Tarheel, he is a graduate of the University of New Mexico and has lived almost all of his adult life in "one western state or another." Currently he lives in Kingston, Washington with his wife of forty-three years and an old Basset hound that allows him to share office space.

When he isn't writing, which is seldom, he spends the majority of his free time with his grandchildren and various organizations dedicated to making Kingston a better place to live even though he lovingly refers to his chosen home as "Port Mayberry."

You have subscribed to alerts for Kendall Hanson.

You have been added to Kendall Hanson's favorite list.

You can also sign-up to receive email notifications whenever Kendall Hanson releases a new book.