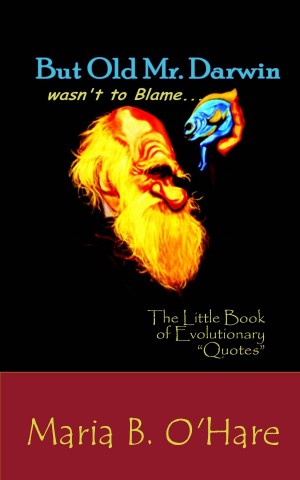 But Old Mr. Darwin Wasn't to Blame: The Little Book of Evolutionary "Quotes"

By Maria B. O'Hare
Evolutionary "Quotes" from well-respected scientists that you might find quite revealing. Flip book of paperback available to view below. Just copy and paste into your browser/url address bar
http://online.fliphtml5.com/fmzw/eoqw/#p=1 More
But Old Mr. Darwin wasn’t to Blame: The Little Book of Evolutionary "Quotes", as the title suggests and, the quotes should reveal, Charles Darwin wasn’t actually to blame for all that ensued in his name. In fact, he was actually quite Lamarckian in his view of evolution, as revealed in later correspondences and editions of 'Origin'. Collectively these quotes form an outline of a narrative that I hope you will find illuminating and get as much from reading them as I did from discovering them. You may even be a little shocked, stunned and occasionally let out a little gasp when you hear what some top scientists have actually said about our modern synthesis. However, these quotes are not simply an exercise in pointing out what is obviously wrong with our modern Neo-Darwinian model of evolution, but, they should also reveal nuggets of an entirely new synthesis that is emerging, or re-emerging out of the ashes of the old paradigm.
Download: epub mobi (Kindle) pdf more Online Reader
lrf pdb txt
Price: Free! USD
Add to Library
Create Widget
Tags: evolution charles darwin alternative evolution epigenetic evolution common descent darwin quotes evolutionary quotes lamarck epigenetics the modern synthesis alternative to darwinism
About Maria B. O'Hare

Free Ebook of Evolutionary Quotes and presentation of the big "quote" book
Short video offering a Free E-book entitled: 'Evolution: Will the Real Ancestor Please Stand UP' (visit http://diggingupthefuture.com for more info on where to download free book or download on Smashwords directly). This quote book presents a narrative via well-respected scientists, revealing a much needed alternative to our current model of evolution AKA: Neo-Darwinian evolutionary theory.