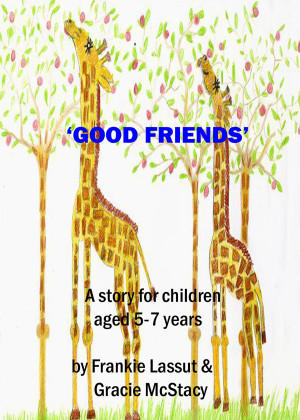 Suitable for younger children, and would maybe benefit from adult participation. Adults would enjoy this short story too. An enlightening story.

I am the one being shaved; the other one Nim, is is a looney bin now!
I went to see a psychic years ago who ended up as my girlfriend; she didn’t see that one coming! But she was extremely honoured. However it ended badly i.e. it rained heavily as I buried her body and I got soaked. No! You don’t really want to hear about it, it’s depressing; I was joking about the burial. She told me that I was to uncover a talent I had … Well, another psychic told me that as the first one was dead; I was lying when I said I was lying. Nothing happened for quite a while. Suddenly I realised I needed a ‘job’ quite badly as I was beginning to drink halves. No, not a boob ‘job’! I went for the cheap option i.e. the surgeon gave some socks to shove up my jumper when I go out. I got a ‘job’ (have you got boobs on your mind?) because someone told me that bus-driving was easy because you just sit on your butt and turn the wheel. She was about six, a wise woman … that’s called an oxymoron. Fantastic! I thought get the job and in a couple of days I’d be driving all the nice passengers around and about seeing all the sights for a fraction of the cost of a tour bus; and we’d have a roof in case it rained. Easy! First of all though there was the training; and I entered hell.

I was born in Cumbria in a little ex-iron ore mining town called Millom. It was only small, a one- horse town; the horse was called Peg. It had a pedigree name too, but I can’t remember it at the moment: Peggy Suss? However, I got fed up and left as I was the only man in a town full of women and they were all lesbys; I’ve always been lucky. I went to Blackpool and attended the photographic college. I then moved to Coventry and met the psychic who would tell me what was going to happen. I could say now that the rest is history. Well it is, but obviously not history as that’s all made up anyway. Then I got the job bus-driving, which as I said is easy ‘you just sit on your butt and turn the wheel’. The bus station management weren’t pleased that she had said that though, so she was tried and sent to Guantanamo Bay; they have a section for young kids who are bad to the bone.

The job was so mad that I thought it would be a good idea to write out some posters and stick them all on the wall of the bus station. The other drivers enjoyed them, but the management tore them down, the badstars (that’s an anagram of astards +B). I carried on and ended up with a manuscript for a book, which, by the way is ‘brilliant’. The management didn’t like it, but bollocks to them.
I couldn’t stop writing after that episode and I’ve been writing ever since, mostly cheques to people, such as the mortgage people and the gas board etc. I am so brilliant that I’ve lost all my friends because I wrote about them in my style which I believe is called Bizzaro. My inner being is a bit of a crazy horse, because whatever I write it has to be in that style, even the horror. It just goes that way. ‘Ordinary’ writing to me is like lemonade minus the bubbles … I can’t bring myself to do it; but thank God I can still bring myself off. I need a selfie stick as I do that because the close focus on the phone won’t do it; how else am I going to post them on the Dark Web?

Writing is like a drug. When I was writing my Millom book, the pictures that flashed into my head were so funny to me that I laughed myself into hernia-ville; my stomach tore. I got injured writing.
You see, hernia-ville, a retirement home for people with stomach hernias; no comedians are booked to appear at that place.

So, my writing is brilliant, so read the bloody stuff!
I have actually suffered for my art. I won’t go to hospital to get it fixed because, well, I’ve written about that friggin place too.

All that and now I’m an international bestselling author. I’m the only author in this world who has sold books on Mars (eat your heart out Tony Robbins), so I can say with certainty that Martians have fabulous senses of humour.
What a profile!

A nice a touchy story, reminding that we are all human. Love, Natalia Levis-Fox

You have subscribed to alerts for Frankie Lassut.

You have been added to Frankie Lassut's favorite list.

You can also sign-up to receive email notifications whenever Frankie Lassut releases a new book.