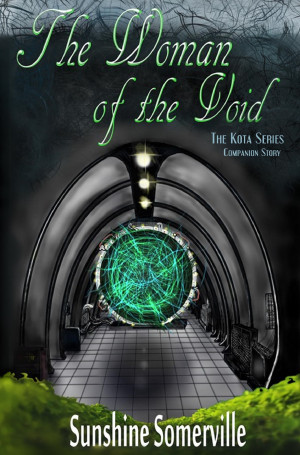 The Woman of the Void

Raised in an isolated Kota village, Vedanleé uses her gifts to draw magic from the ancient lands of her coastal home. The Clan Eldress, the most powerful woman in the village, has a vision about the prophesied Woman of the Void – a woman destined to wield unfathomable power. To her surprise, Vedanleé is named as this woman.

Then Thurston Olander, Lord High Commander of the Dominion global empire, comes to fulfill an old custom. The women of the clan uncover a whole new danger, and Vedanleé must go with Thurston to ensure their safety.

Living in the Dominion’s technologically advanced world, Vedanleé’s power over the void grows as she discovers the science behind her magic. But she lives in fear, for Thurston is not what he seemed.

Sunshine Somerville is a Science Fantasy author who loves blending genres. She has a degree in English Literature and self-published her first book at the ripe old age of nine. Originally from the beachy side of Michigan, she now lives in the Detroit area with her husband, two fur babies, and one human daughter.

THE KOTA SERIES is a Science Fantasy epic based on youthful obsessions with X-Men, Star Wars, The Chronicles of Narnia, Dark Angel, and A Wrinkle in Time.

THE ALT-WORLD CHRONICLES is an Urban Fantasy series inspired by weird recurring dreams, a brainstorming session in the shower, and one ridiculously hot summer lived in Kansas City.

A FAIRLY FAIRY TALE is Sunshine's first Middle Grade Fantasy book. She got the idea from her family's crest, which portrays a dragon shooting flames from both ends, and from a niece whose second favorite word is farts.

The Woman of the Void Book Trailer
A tyrant with a vendetta. A witch with a destiny. All’s fair in war and magic.

Also in Series: The Kota Series

You have subscribed to alerts for Sunshine Somerville.

You have been added to Sunshine Somerville's favorite list.

You can also sign-up to receive email notifications whenever Sunshine Somerville releases a new book.