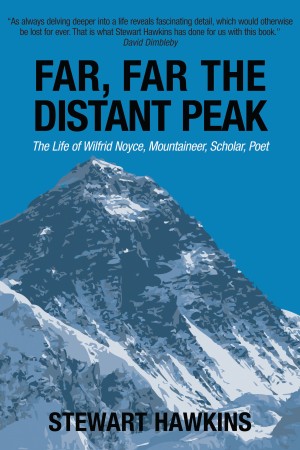 Far, Far, The Distant Peak: The Life of Wilfrid Noyce

After the war he became a schoolmaster, first at Malvern College and, after his marriage in 1950, at his old school, Charterhouse. He taught Classics initially and then French and Italian and was appreciated for the quiet manner in which he delivered his lessons. He was a popular master and many are the boys who are grateful to him for introducing them to the mountains and inspiring them with a love of adventure and the outdoors.

Poetry and writing came naturally to him. Articles and poems flowed from his pen from early on and when he was established as a writer, he published a new book almost every year. Most of these concerned the mountains and adventure but the biography-poem Michael Angelo was published in 1953 and Poems in 1960.

Born in 1938 Stewart Hawkins spent the war years in North London. He was educated at Charterhouse and Balliol College, Oxford. He did National Service in Nigeria and while an undergraduate served for a year as a Political Officer in the colonial service in the Eastern Aden Protectorate. After Oxford it was back to Nigeria with a major international oil company, followed by four years exporting Welsh steel to Europe and the Middle East. Then after twenty-four years with a major computer company which was punctuated with spells in the United Arab Emirates and Paris, he retired. He started climbing at school with Wilfrid Noyce and has been a member of the Climbers' Club for over fifty years. A very keen Scout from an early age he has been International Commissioner for the UK Scouts, Chairman of European Scouting and Chairman of the European Scout Foundation. He has three sons and enough grandchildren and was widowed in 1998. He now lives with his second wife in the Southern French Alps.

Reviews of Far, Far, The Distant Peak: The Life of Wilfrid Noyce by Stewart Hawkins

You have subscribed to alerts for Stewart Hawkins.

You have been added to Stewart Hawkins's favorite list.

You can also sign-up to receive email notifications whenever Stewart Hawkins releases a new book.