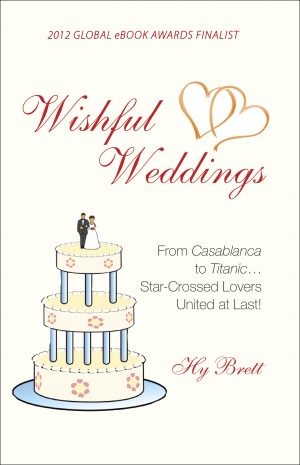 In this rollicking ride on the road to romance, we also find Hamlet and Ophelia, Barbie and Ken, Tarzan and Jane tying the knot at long last. La Boheme's Mimi and La Traviata's Violetta have miraculous recoveries from their TB and rush down the aisle into the arms of Rodolfo and Alfredo. Scrooge is reunited with his childhood sweetheart. Sherlock Holmes walks to the altar with a possibly rehabilitated Irene Adler. Robin Hood and the Maid Marion, and Don Quixote and the Fair Dulcinea ride off into the sunset as husband and wife. Even Benji and Lassie find marital bliss. And that's only the beginning.

Wishful Weddings: From Casablanca to Titanic—Star-Crossed Lovers United at Last! is a triumph of love and laughter. It's the perfect book for every couple who has taken the marriage vow, or intends to take it. For every woman who is a bride, or hopes to be one. For everyone who loves, or hopes to love. We all long for a happy ending. Here are fifty-two of them, one for every week of the year. And every one of them will keep you smiling for long after that!
Available ebook formats: epub
Price: $4.99 USD
Buy Add to Library Give as a Gift
How gifting works
Create Widget
Tags: romance humor satire classics movies weddings brides
About Hy Brett

Hy Brett was a librarian and feature writer at the New York Post until he left to become a fiction editor and freelance author. His articles and humor have appeared in such diverse publications as The New England Journal of Medicine and True Confessions. PROMISES TO KEEP, the critically acclaimed mystery novel he wrote with his wife,Barbara,was a Mystery Guild main selection. His quotation anthology, HOW TO SURVIVE THE NEW MILLENNIUM: Recycled Wisdom for an Age of Diminished Expectations, was hailed by critics as "an indispensable book for the Anxious Class," and as an "inspirational" aid by John A. Koskinen, Chair of President Clinton's Council on Year 2000 Conversion. THE ULTIMATE NEW YORK CITY TRIVIA is Hy's love letter to his home town. Mayor Rudolph Giuliani was so impressed with it that he had excepts featured on New York City's Centennial Web site. Hy also co-authored A BOOK OF LOVE FOR MY SON with H. Jackson Brown, who wrote the perennial bestseller LIFE'S LITTLE INSTRUCTION BOOK.

You have subscribed to alerts for Hy Brett.

You have been added to Hy Brett's favorite list.

You can also sign-up to receive email notifications whenever Hy Brett releases a new book.