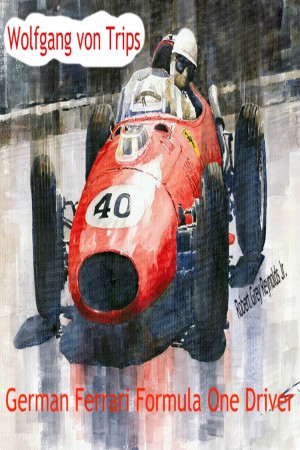 By Robert Grey Reynolds, Jr
I have researched my e-book using newspaper clipping, Life magazines, and more recent bound volumes that chronicle the racing career of Wolfgang von Trips. Coming into the final Grand Prix of 1961 von Trips was leading his teammate, Phil Hill, by the narrowest of margins. If the German placed between 1st and 3rd at Monza, site of the Italian Grand Prix, he would win the coveted world championship. More
Baron Wolfgang von Trips was a German nobleman from the Rhineland of Germany. He gave up his castle and privileged life to enter the sport of Formula One racing in the mid 1950s. By September 1961 he was on the threshold of winning the Formula One World Championship, as a driver of a Ferrari. Trips also ran at Le Mans, Rio de Janeiro, Mexico, Nassau in the Bahamas, and many other sports car tracks. He competed in a Porsche at the Le Mans, France 24 hour endurance race with Wolfgang von Frankenberg. The Germans drove a Porsche in the grueling event. Von Trips was known as a driver who took risks, somewhat different than his American Ferrari teammate Phil Hill. In the late 1950s and early 1960s Ferrari fielded a team of three factory cars in F1 racing. Aside from Trips and Hill, Richie Ginther was a mainstay among drivers of the famed Italian marquee.