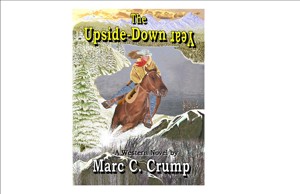 By Marc Crump
This fast-paced Western drama tells what happens when a wide range of characters, that convey the devotion and cruelty of the period, finally clash in Pleasant Valley. It's there that you will be drawn into a Western Adventure you won’t soon forget, as their lives and possibly yours, begin to turn upside-down in a life and death struggle from which there is no escape.
Available ebook formats: epub mobi pdf rtf lrf pdb txt html
First 50% Sample: epub mobi (Kindle) lrf more Online Reader
pdb
Price: $8.88 USD
Buy Add to Library Give as a Gift
How gifting works
Create Widget
Tags: rifle horse bullet indians wild west old west pistol outlaws sheriff lawmen horse theaves bank robbers stagecoach sixgun winchester colt saddle gunslingers bandits bounty hunters
About Marc Crump

Marc C. Crump enjoyed his formative years in the Mojave Desert where he learned to shoot, hunt and ride horses. He fondly remembers his evenings with his parents as they gathered around the radio to listen to Gunsmoke and The Lone Ranger. When they got their first TV (black & white), his favorite genre became more alive with Roy Rodgers, Gene Autrey, Hopalong Cassidy and an endless supply of other western heroes over the coming years. These shows helped fill Mr. Crump with an indelible and lasting lust for knowledge of the legends of the west.
With his interest in firearms, he apprenticed as a gunsmith in Sacramento. He eventually opened his own gun shop in Cloverdale, Oregon.
Crump has combined his knowledge of guns, horses, and his life long craving for the history and grandeur of the Old West, to create his new and exciting career as a writer of western novels. Among his favorite authors are: Zane Grey, Louis L’Amour, Luke Short, Max Brand and Larry McMurtry, to name a few.

Reviews of The Upside-Down Year by Marc Crump

You have subscribed to alerts for Marc Crump.

You have been added to Marc Crump's favorite list.

You can also sign-up to receive email notifications whenever Marc Crump releases a new book.