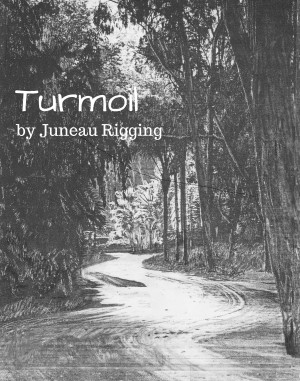 By Juneau Rigging
Chester Turmoil was born wealthy, trained as an electrical engineer and obsessed with achievement. His entrepreneurial instincts are shaped by public service ambitions. His single-minded push to re-shape the world to be what he thinks it should be finally crashes headlong into the reality of the world as it is, changing the world for him and all the people important in his life. More
Dr. Chester Turmoil, born to a wealthy San Francisco family and by upbringing and inclination obsessed with achievement, hires Juneau Rigging to document the development of Turmoil’s effort build the perfect energy efficient house. The property, in a remote area northeast of the Napa valley, aims to be sustainable in every way. Liking Riggings first efforts to document the project Turmoil then involves Rigging in documenting a political event that is part of Turmoil’s campaign for Congress.

Rigging’s curiosity piqued so while the construction project evolves Rigging begins researching background on Turmoil. As he meets more people who know Turmoil he begins hearing and recording stories about a variety of Turmoil’s eclectic and sometimes weird projects.

On a Napa Valley wine tasting trip Rigging meets Reginald Farley, who, after drinking copious amounts of wine claims to be a Treasury agent and tells Rigging a convoluted tale (partly verified later by a third party) of how he won a promotion to Washington by undermining Turmoil’s efforts to rein in the power of Congress and big money power brokers.

Internet inquiries put Rigging in contact with Enos Flid, a Turmoil employee, who tells Rigging of programs developed by Turmoil attempting to mimic the thought processes of famous authors and write fiction. Flid then periodically forwards stories written by the programs as he develops them on Turmoil’s computers.
On a trip to Turmoil’s college reunion Rigging meets Simon Stonefeller who tells Rigging about an attempted prank on Turmoil that backfired and caused to Stonefeller to leave his fraternity.

On the construction project problems arise between Turmoil and Roy, the contractor. In part the problems relate to the progress on the construction. But the most irreconcilable problem is that both men are attracted to Sazi, the female architect who designed the house. Roy is a flirt but Turmoil has grander ambitions having decided Sazi would be his wife.

The problems culminate in a confrontation during a huge storm pounding Northern California. Roy’s estranged wife April arrives with her attorney seeking to enforce and support order. During the confrontation Rigging learns some of Turmoil’s most cherished ambitions have crashed headlong into reality as Turmoil has been turned down in no uncertain terms by Sazi, and barely got a vote in the congressional election. The subsequent events of that stormy and tumultuous evening end with everyone believing Turmoil has perished.
Shortly thereafter Rigging meets Mordeci Rake, an attorney who says he had periodically represented Turmoil. Rake claims to have seen Turmoil in a town far to the north living as a homeless person. Rigging begins investigating the claim, and when it appears to be true goes back to Rake to find out about Rake’s involvements with Turmoil.
Rake begins by telling Rigging a tale of debating computer programs designed to mimic the thought process of Karl Marx and Adam Smith. Their debate on the merits of the economic theories each has come to represent result in a Rake being entombed, only to be inadvertently rescued by his grumpy disrespect.

Then Rake relates an experience with Turmoil that involved a ludicrous legal mess that began with Turmoil lecturing neuroscientists on the need to take astrology seriously and ended in a lot of litigation to line Rake’s pockets.
In the meantime it has become apparent Turmoil has chosen life as a homeless person, despite Rigging’s best efforts to convince him to return to his life. Ultimately another women, April, the estranged wife of Roy, helps Turmoil find in himself the desire renewed purpose to resume his life. But the unresolved conflicts with the Roy culminate in events that profoundly change the world of everyone involved.

I imagine I must have been born in Rooster Rapids Oregon, November 30, 1967. A Sagittarious Fire Sheep the astrology folks might say. Turmoil might have said my background probably explains who I am.

My parents met at a civil rights march in 1963. They were both disallusioned college students at the time. They were full blown hippies by 1965 and disallusioned hippies by early 1966, so they headed for the wildness of Alaska. When the Alaska winter proved to be too much for them they used some money my mom had inherited to buy some acreage in Rooster Rapids. They were living in a Tipi on the acreage when I was born.

You won't find Rooster Rapids on a map. It is in a remote part of the Rogue River watershed in Southern Oregon. The locals were prone to growing illegal crops so avoided describing the area with any word that could be found on a map. I am still uncomfortable disobeying that particular cultural norm.

I spent my winters as a child in Rooster Rapids. While I learned to love the outdoors, as an only child I found it boring. So I read alot. Summers were better. Dad and Mom would head to Alaska to find work. Dad had friends with a fishing boat so we often spent early summers in Dillingham on the far west coast when the salmon were running. Later in the summer either Dad or Mom or both would look for seasonal work, usually somewhere between Juneau and Ketchikan where the winter trip back to Oregon could be done on the ferry in their camper van.

I did manage to graduate from high school. Despite moving around a lot since I was a voracious reader I didn't find progressing in school that difficult.

At 18 I left home. I have stayed in touch with Mom and Dad but their lifestyle built around what I percieved to be rejection of a government and culture that did not conform to their standards didn't interest me.

Initially I mostly worked as a dishwasher, bus boy, or gardener, with occasional short stints as a fisherman. Eventually I graduated to bartending and occasional jobs as a short orger cook which sustained me for my college years and into the first years of my efforts to become a writer.

I guess you can read the book for the rest.

You have subscribed to alerts for Juneau Rigging.

You have been added to Juneau Rigging's favorite list.

You can also sign-up to receive email notifications whenever Juneau Rigging releases a new book.