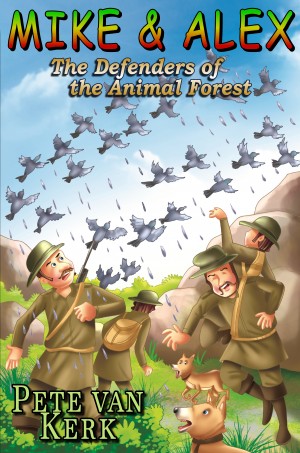 Mike&Alex, the Defenders of the Animal Forest

By Pete Van Kerk
Childrens book 4-10 years, also for (grand)parents. It's about animals that defend their forest under the lead of a very big rabbit (Mike) and a wild swine that used to be small, but grows also very big with the feeding from farmer Jacob. The animals fight for their rest, for their forest and for not being shoot at the hunt. On the contrary, they chase the hunters! More
Childrens book for 4-10 years old. Also (grand)parents will laugh about!
It's about Mike, the biggest of the rabbit-kids, and Alex, the smallest of the swine-kids. They are close friends.They play together and discover the forest. But on a good day they collected selfconfidence to have a look outside the forest. They hide, in particular in the corn field. Some later with even more courage they make it to the barn of sow Sophie and her piglets. Sophie wants to remain a Lady, to slim to be slaughtered and she loves to get more babies. Therefore she asks the friends her leftovers. The farmer always gives her to much. That high quality farmfood lets Mike and Alex grow, grow, grow! They also get very strong. That brings them and Mr. Owl to the idea to undertake activities against the people that will harm them. They get help from farmer Jacob. He has a horse Jack that's the translator between animal- and human speech.The animals of the forest don't like noise, so they ruin a house warmingsparty of Baron and Baroness Brilliance d'Appearance till NothingintheMain. That's not all. A road that's designed to split the forest is skilled demolished, both the machinery and the road Body. Finally big plans are developed to chase the hunters away in the autumn. With a huge Air Force of doves, that have learned precise bombardments from the swallows for their white "bombs" and the cow manure, the hunters return home without prray.

I'm born. That happened on Sunday 12.31.1939. My brother grew faster than me in the stomach of my mother, so I was in deed of fresh air, to see the world. After an hour (!) the doctor noticed my brother wasn't there yet. I was only some 4 pounds and got in the incubator. Therefore there were babyclothes and a babybed for my brother. Within three weeks I had made up with him, because he was on strike with the milkfactory. We're still Brothers.
I finished up WWII with epilepsis because of malnutrition. Nevertheless I had gone with the neighbours they buying and I stealing sugarbeets from the field and deadwood from the forrest. Was not allowed by the Germans, but as a 4 year kid I didn't understand them (wouldn't) and neither arrestable. O, I could look so smart with a bundel of dead Wood in my arms. Because of the epilepsis and old medication I can't show you an examplary education. When I was some 17, 18 I grew for a great deal over plus the effect of more modern medication. However, I'll always remain an epileptician. Only now it's so under control I can drive safely.
My education: I'm an educated farmer, finished study 1960. That year I was co-winner in an European essay-contest on the Agricultural Cooperatives in the European Common Market.
My Dad had asked me when I was 14 (1954) for the first time to write a few small reports for his local newspaper at Zeist, Holland. Many would follow. As from 1961 I worked as a journalist with a variety of papers and radio. 1965 I came with Dads paper with the aim to succeed him in July 1970. However, I could get a job as economic writer at Algemeen Dagblad at Rotterdam, the second largest Dutch daily. That was a good choice. The paper at Zeist only existed for a few more years after I left. While working at the paper at Rotterdam I studied economics (level teacher Highschool) and Shell trained me at all aspects of the oil & gasbusiness. Based on my technical and market know how I wrote brochures for all oil majors, because I was gifted with the ability to describe their installations and processes in very easy wording. Because of the brochures they got easy permits to extend. I advised OPEC ministerial meetings with markettrends and got in return prime news and many more interviews than any of my colleagues.
When you're in a newspaper good in reporting they put you in the chief seat. That earns! But the quality of work..., no. Anyway at 61 years I was forced, after an heartattack, to retire. But o dear Readers, I'm so healthy as a fish! I also survived cancer. During the pre-retirement I was towncounsillor in my village Alblasserdam, defended asylumseekers at immigrationhearings and became trainer of the youth Team of my chess club. Two of them I brough into the Dutch national championship and the team succeeded twice to jump to a higher class.
1968 my wife and I moved to Germany, away from the Dutch bureaucracy and smell, into the countryside. We got two children and five grandchildren. While I worked with the daily I wrote a book with interviews with CEO's of the ten largest Dutch companies. It was about their views on the years 90. None predicted right. The second book was published 2012 in Dutch and 2013 in English and German about my years as a double agent between East-Germany and Holland.

You have subscribed to alerts for Pete Van Kerk.

You have been added to Pete Van Kerk's favorite list.

You can also sign-up to receive email notifications whenever Pete Van Kerk releases a new book.