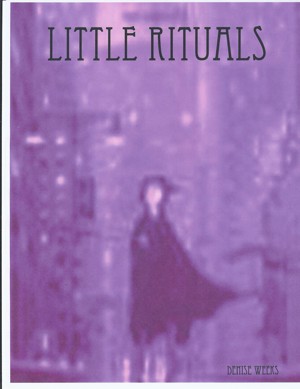 By Denise Weeks
Daphne Dilbeck's life is ruled by little rituals. When everything starts going wrong, she realizes she is under a hex or curse caused by a botched ritual. Can she fix her own luck, or is she just OCD, superstitious, and delusional? Daphne's wacky investigation into the nature of luck parallels her personal search for meaning and coming-of-age as a grown-up, with a lot of help from good friends.
Available ebook formats: epub mobi pdf rtf lrf pdb txt html
First 35% Sample: epub mobi (Kindle) lrf more Online Reader
pdb
Price: $1.99 USD
Buy Add to Library Give as a Gift
How gifting works
Create Widget
Tags: comedy humor paranormal magic chick lit ocd superstition rituals
About Denise Weeks

Denise Weeks (Shalanna Collins) has been a writer since she could hold a crayon. She is a graduate of Plano Senior High and Southern Methodist University, and worked as a software engineer for several years.

Like many homegrown Texas humorists, Shalanna is not funny. Novelist, pianist, belly dancer, baton twirler (but no fire batons ever again, by order of the Renner, Texas, Volunteer Fire Brigade), high priestess of Paul McCartney, and amateur radio operator, she has published many fascinating short pieces on her weblog (not a "diary"--diaries pretend to some version of the truth, and writers don't hold with strict veracity. We prefer stories. They make more sense.)

A graduate of SMU many years after Laura Bush, Shalanna has worked as a software engineer, Dairy Queen soft-serve cone maker (she perfected that little twirl on the top of the dipped cone), math tutor, and most recently head quality-control supervisor at the banana factory--but at every job, she subverted the paradigm and secretly recorded the bosses' conversations to use in her horror stories. (Okay, we made up that bit about the banana factory just to sound cool.)

She has been writing since she could hold a crayon. She started with fiction, which Mama said was "lying," so she was frequently spanked (forty lashes with a wet tortilla). Consequently, she can twist a fact in the service of her claims until it screams for diplomatic immunity. Elected a permanent member of the Cool Kids for her stellar recipe for Toasted Tangerines-avec-Brie, she is currently at work on a series of cozy mysteries as well as on various works of literary genius. Last month she experienced her big showbiz break when she shouted, "Pick me, ya croptop jarhead!" at Drew Carey from the studio audience of "The Price is Right.” She went to New York City last December as one of eight finalists in the Scotch Brand Most Gifted (Gift) Wrapper Contest and participated in the final rounds held at Rockefeller Center. While in NYC, she made a pilgrimage to the Algonquin to kiss the famed Algonquin Round Table where Robert Benchley, Dorothy Parker, and many other greats once sat every day at lunch. Her novel _Dulcinea_ was the first runner-up in the original 1996 Warner Aspect First Fantasy Novel contest.

She and her husband live happily in a northern suburb of Dallas, Texas, with their two beloved pets: a yappy Pomeranian and Shalanna's elderly mother.

She collects Benchley first editions and patterned paper towels. Her favorite foods are curried yak and French fries. She knows (but is not telling) a plethora of alchemical and occult secrets. Homeland Security has identified her as a person of interest.

http://shalanna.livejournal.com (more of a personal blog than a marketing tool!)

Read one of my books? Have a question? Please feel free to email me at shalanna.collins@gmail.com

You have subscribed to alerts for Denise Weeks.

You have been added to Denise Weeks's favorite list.

You can also sign-up to receive email notifications whenever Denise Weeks releases a new book.