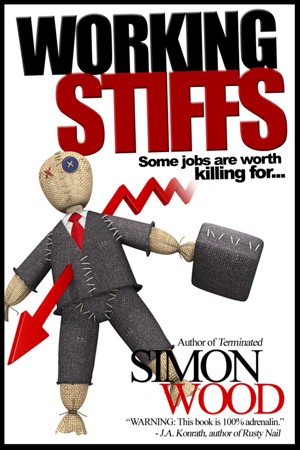 By Simon Wood
The workplace is a dangerous place. The unscrupulous are ready to take advantage of the innocent. A slight indiscretion can cost the employee everything. A new position can turn a person into someone they are not. Those at the top can be toppled and those at the bottom can be crushed.

This award winning short story collection begs the question--aren't some jobs worth killing for? More
The workplace is a dangerous place. The unscrupulous are primed and ready to take advantage of the innocent and naïve. A slight indiscretion can cost the employee everything. A new position can turn a person into someone they are not. Those at the top can be toppled and those at the bottom can be crushed.

Until now, Vincent’s father has kept one side of the business a secret from his son. Vincent is about to learn the family business. On the most important day of his career, Sam’s world will unravel when he helps a woman in distress. Todd has failed in every job he's undertaken, but that changes when he backs into a drug dealer's car. Now he’s in hock with organized crime and can only get himself out from under if he works for them to pay off his debt. Kenneth Casper is ailing and so is his business empire. His shareholders circle like vultures. Casper pins all his hopes on a Peruvian shaman with a miracle cure.

Working Stiffs...Some jobs are worth killing for.

The book features My Father's Secret which won the Anthony Award for Best Short Story.

“Consistently surprising and well-written, Working Stiffs proves Simon Wood is a criminal genius. We should all be glad he’s writing this stuff and not doing it.”
— Cemetery Dance

“For a lover of short stories, this collection was a full meal. Wood changes voices, demographics and plot lines like a teen changes clothes for a first date. Each story is a strong sampling of humans at their most human told with the finesse that comes from experience and a love of the genre.”
— Crime Spree

“His style will seem effortless to the reader and turn every writer green with envy.”
— Hellnotes

You have subscribed to alerts for Simon Wood.