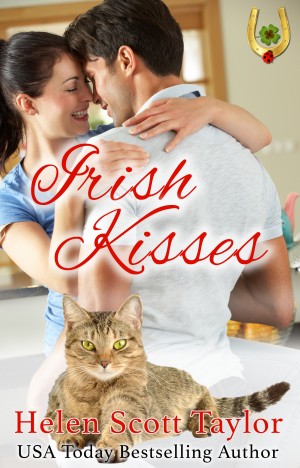 By Helen Scott Taylor
Rated 3.00/5 based on 1 reviews
On Fiona Flannigan’s sixteenth birthday Aaron O’Malley kissed her by the wishing fountain at Ballyglass Castle. He said he loved her, then he left and broke her heart. Ten long years later he’s finally back, but his work as an undercover cop has left him fighting inner demons. She wants to help him recover, but dare she let him into her heart again?

Helen Scott Taylor's first novel, The Magic Knot, won the American Title contest in 2008, was a Golden Heart® finalist, and was chosen as one of Booklist's top ten romances of 2009. Since then, she has published other novels, novellas, and short stories in both the UK and USA.

Helen lives in South West England near Exeter in Devon overlooking the windswept expanse of Dartmoor. As well as her wonderful long-suffering husband, she shares her home with a Westie and a fluffy birman cat. She believes that deep within everyone there's a little magic. www.helenscotttaylor.com

As far as short romances go, Irish Kisses by Helen Scott Taylor is actually pretty good. The world building is excellent and I love the characters as well. But the 21,000 words is just not enough to do the story justice.

I've always been interested in Ireland, ever since reading The Celtic Knot from The Girls of Many Lands series. And Irish Kisses captures the magic I've always associated with Ireland perfectly.

Fiona and her brothers own Ballyglass Castle, which they turned into a tourist attraction to make a living. They rent out rooms in the castle and take tourists on the wishing trail, a scenic walk filled with wishing jars, which tourists can leave as well. It's a whimsical yet awesome idea that really adds to the idea of Ireland being full of magic, especially rural Ireland. I can understand why Aaron O'Malley would want to leave the city for such a magical place, especially the place where he grew up.

In addition to the magic of Ballyglass Castle, there is also the hellish crime world that Aaron just spent six years in. Even though this part isn't shown in the story, it is described well as being terrible. Even when Aaron wasn't undercover, his life as a cop feels cold compared to Ballyglass. It's even worse that he spent six years as an undercover cop in a drug cartel when it was only supposed to be one year. I like that this is just Aaron's background, though. While it shows that he's been through hell, this isn't a romance thriller.

However, his post-traumatic stress felt strangely handled. Fiona had him write down his thoughts and feelings on paper and burn them and after that his problems basically went away. Yes, he did mention later that he still had nightmares from his time undercover, and he even said that writing everything down wouldn't make his problems disappear. But it's not really mentioned again. Yes, he's reluctant to go back to Dublin to finish out his case, but that's more because he doesn't want to leave Fiona then he can't bear to go back. But this is the least of the undeveloped plot points in the story.

While the parts that were developed were well written, there were too many undeveloped plot points. Like the issues Aaron had with his father, and why Aaron never came back to see his grandfather. That's really not explained well at all and I'm not even sure why the former was even in the story. Not to mention Fiona's mom, who isn't even really mentioned until the last page of the story. I honestly thought she was dead, but it was a big deal she showed up for the wedding. What the hell was that about? Was there some sort of falling out that wasn't really brought up?

Now for Fiona and Aaron together. It's rushed. They spent their childhood together before he left her when she was sixteen, breaking her heart. Ten years later they meet again. In a few days it goes from old hurt feelings to a marriage proposal.

However, their love is sweet. Not sexy, or powerful enough to leave me swooning, but it's sweet, and almost innocent. And for such a quick read, it was pretty damn good.

You have subscribed to alerts for Helen Scott Taylor.

You have been added to Helen Scott Taylor's favorite list.

You can also sign-up to receive email notifications whenever Helen Scott Taylor releases a new book.