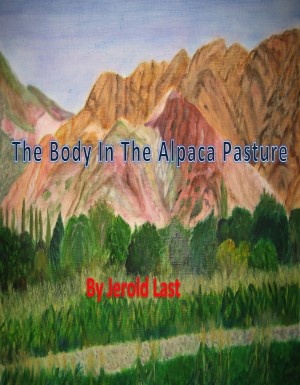 The Body in the Alpaca Pasture

By Jerold Last
Rated 5.00/5 based on 1 reviews
Who killed the technician in tiny Molinos in Argentina’s northwestern province of Salta? Roger and Suzanne celebrate their third wedding anniversary solving this baffling puzzle in “The Body in the Alpaca Pasture”. Their newest South American mystery, set high in the Andes Mountains separating Argentina from Chile, features an exotic setting, a complex murder case, and a suspenseful whodunit. More
Roger Bowman and Suzanne Foster Bowman seemingly can’t visit South America without getting tangled up in a bloody murder case. Their current trip to Salta, Argentina isn’t going to be the exception that proves the rule. Little did Roger suspect that buying a couple of alpaca sweaters for Suzanne to celebrate their third wedding anniversary would plunge the detective couple into another South American murder mystery. In “The Body in the Alpaca Pasture” Roger and Suzanne are asked by their friend, an overworked homicide detective based more than half a day’s drive from the scene of the crime, to visit a small town in his jurisdiction where there was a baffling killing a few days earlier. He wants Roger and Suzanne to advise him whether or not it is worth wasting his time investigating the murder before adding the skimpy file to his already large stack of unsolved cases.

Somebody shot a modern-day gaucho in the back at an isolated alpaca breeding facility in the small town of Molinos, high in the Andes Mountains in Argentina’s northwest province of Salta. In this isolated area far off the beaten track for tourists, everybody at the research facility had an opportunity to shoot the victim without being observed committing the crime. This isn’t a crime that will be solved by CSI. There aren’t any fingerprints, footprints, a murder weapon, or other traditional clues conveniently left around the cadaver by the killer. The local police (both of them) are glorified meter maids, totally untrained to solve a mysterious murder like this one. By the time Roger and Suzanne arrive the corpse has long since been sent to the nearest hospital for an autopsy, the results of which have been lost by the local bumbling authorities. What was the motive? Why was the victim targeted? Was it murder for gain? Roger and Suzanne interrogate the remaining staff members at the alpaca breeding facility as they seek evidence proving the existence of a sinister international conspiracy to explain the reason Oswaldo Pepin died. This fast paced whodunit mystery features an exotic setting, a complex murder case, and a fast paced and suspenseful plot.

The author is a Professor of Pulmonary and Critical Care Medicine at the University of California's Medical School at Davis, near Sacramento in Northern California. Jerry writes “tweener” mystery books (hard boiled stories that follow the cozy conventions of no graphic sex and no cussing) that are fast moving and entertain the reader, while introducing the readers to a region where he has lived and worked that is a long way from home for most English speakers. He and his wife lived previously in Salta, Argentina and Montevideo, Uruguay for several months each. Jerry selected the most interesting South American locations he found for Roger and Suzanne to visit while solving miscellaneous murders. Montevideo, Salta, Machu Picchu, the Galapagos Islands, and Iguazu Falls are also characters in these books, and the novels portray these places as vivid and real. Jerry and his wife Elaine breed prize-winning German Shorthaired Pointer dogs; Elaine also provides technical advice for Jerry’s novels like The Deadly Dog Show and editing for all of the books, many available from Amazon.

I really enjoyed both the murder investigation and learning about Argentina and Argentine alpaca breeding. The investigation was very well done and had lots of info on cultural differences in law enforcement as well as detailed opportunities for learning about alpaca husbandry and details about a particular firearm and its modification. I was totally absorbed by the opportunities for learning and the plot twists! Caveat: I am a knitting addict as well as addicted to Andrea Camilleri and his ilk.

You have subscribed to alerts for Jerold Last.

You have been added to Jerold Last's favorite list.

You can also sign-up to receive email notifications whenever Jerold Last releases a new book.