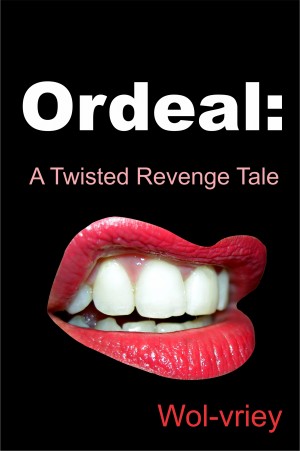 Rated 3.80/5 based on 5 reviews
Jack is a merciless serial rapist and murderer. He chooses his female victims carefully. But tonight, he's selected the wrong woman. Now, for Jack, it's all downhill from here on.

Wol-vriey is Nigerian, and quite tall.

He is the author of Big Trouble in Little Ass,Vegan Vampire Vaginas, Hell Dancer, Brainchew, and Blue Nightmares.

This story is about one narcissistic psychopathic serial rapist and killer. He is one twisted evil SOB. He hunts at night on the mean streets where his female victims are desperate and destitute. He hunts vulnerable women. But his luck and life are about to take a very unsuspected turn. He becomes the hunted and victim to someone even more twisted, and more deranged, and sick then he is. Think of the movie “I Spit On Your Grave” and you will get the idea of where this story heads. At the end you almost feel sorry for this man, sorry, but not sorry at all.

Is there anything sweeter in this world than poetic justice? Anything more deeply fulfilling than watching some despicable human being get their just deserts? Anything more satisfying than seeing some piece of garbage get what's coming to them? Well, the moral of Ordeal is more cautionary then celebratory, but it still makes for one hell of a guilty pleasure.

Wol-vriey tells us the story of a man named Jack and a woman named Gina, two lonely lovers who meet beneath the street corner lights. Jack is a monster who likes to watch women suffer, getting off on the terror in their eyes when he rapes and murders them. His plans for the hooker with the movie star looks are just about as dark as you'd expect . . . but child's play compared to what she has planned for him.

This is a dark and twisted real, full of despicable violence and pain. Jack is a simple man with simple tastes, a monster and a villain without a single redeeming quality. As such, it's hard to feel even an ounce of compassion or sympathy for what he is forced to endure. As for Gina, she may be a monster and a villain herself, but she is also a complex human being. Her obsessive-compulsiveness is both unnerving and humorous, but it's her desperate need for love that makes her truly fascinating.

I won't spoil the fun - it's free, so give it a read yourself - but this is a book of layers, one with a really interesting contrast between order and chaos, and some deeper significance beneath the violence. It's a fun, brutal read that will also make you think.

Um I am not often speechless but I have no words. The story itself was well written, the content seriously disturbing. But being a woman I can appreciate the message revenge is a bitch and rapists and murderers should be punished the same way they inflict pain. So for that Brava.

You have subscribed to alerts for Wol-vriey.

You can also sign-up to receive email notifications whenever Wol-vriey releases a new book.