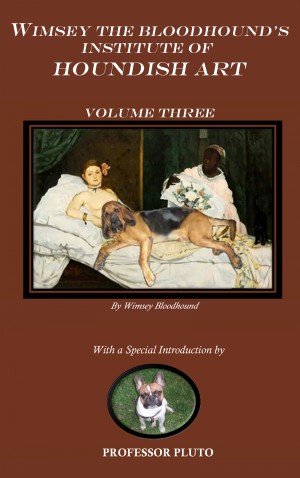 Wimsey was born in Sand Lake Michigan and is the son of Stetson (Champion Ramsey Creek’s Walk on the Wild Side) and Rum (Ewine’s Rum of Ramsey Creek). Although he inherited his father’s commanding voice and outsized personality, Wimsey also inherited his mother’s sensitive nature and love of art and beauty. It was this latter love that was nurtured and enhanced by his puppyhood move to Manhattan’s Upper West Side where, although he did not have access to the city’s art museums, he nevertheless became a voracious consumer of books on art history. Wimsey has had a storied and colorful career as a show dog (known in show circles as “Champion Ewine’s RMZ Crk Wimsey,” he was shown at Westminster three times) and an equally storied and colorful (although less successful) career as a canine model where he was routinely banned from photo shoots due to his inability to take direction and frequent demonstrations of his vocal talents. In addition to his position as curator of the Wimsey Institute of Houndish Art, Wimsey has also for many years written a weekly blog (Wimsey’s Blog: Diary of a Manhattan Bloodhound, http://wimseyblog.blogspot.com) and is the author of an as yet unpublished children travel book, Wimsey’s Guide to New York. He currently resides on the Upper West Side of Manhattan where he is a very well known and well-heard figure.

You have subscribed to alerts for Wimsey Bloodhound.

You have been added to Wimsey Bloodhound's favorite list.

You can also sign-up to receive email notifications whenever Wimsey Bloodhound releases a new book.