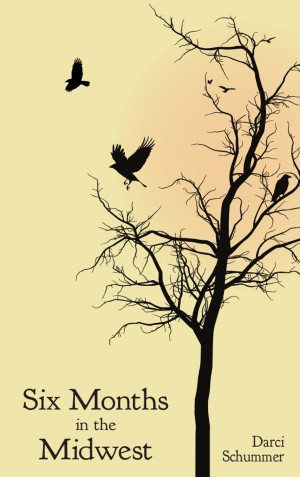 Six Months in the Midwest

By Darci Schummer
Characters come together in this collaborative short story collection. Dealing with life choices, quirky behavior, and an array of emotions, Six Months in the Midwest is a stand out collection from author Darci Schummer. More
In the dark heart of a Minneapolis winter, a young boy struggles to understand his mother’s failing health as she teaches him Polish, the language of her dead mother. From a distance, a frustrated English professor dines with her mentally ill ex-husband in a park on which a mansion once stood. A single mother struggles to let go as her teenage son seeks his independence. A drag queen and his partner battle a snow storm while debating the future of their relationship. A retired garbage collector finds solace in the ballet, and the owner of a liquor store tries to find companionship on the streets and in the bars of Minneapolis. Equal parts bitterness and beauty, the sixteen stories in this collection are plotted snapshots of a city in its most unforgiving season.
Available ebook formats: epub mobi pdf rtf lrf pdb txt html
First 8% Sample: epub mobi (Kindle) lrf more Online Reader
pdb
Price: $2.99 USD
Buy Add to Library Give as a Gift
How gifting works
Create Widget
Tags: womens lit short story collection darci schummer darci schummer books six months in the midwest small press books unsolicited press books
About Darci Schummer

Darci Dawn Schummer, a Wisconsin girl, is the eighth daughter of a firstborn son. She started writing at the age of nine but never really called herself a writer until she attended the University of Wisconsin—Eau Claire where she filled beat up Meads with stories and poems. In 2005, she moved to the Minneapolis/St. Paul area to attend Hamline University’s MFA program.

During her time at Hamline, she sailed around city streets on city buses, often finding her characters sitting in the seats ahead of or behind her. She wrote madly—assembling and disassembling stories until she understood how they worked.

Since graduating from Hamline, she has published several pieces of short fiction in places such as Paper Darts, Twin Cities Run Off, The Diverse Arts Project, Feile-Festa, Conclave: A Journal of Character, Vita.mn, Everyday Fiction, Revolver Magazine, and Midwestern Gothic. Also, her work has been anthologized in Lyrotica, Rattlesnake Valley Sampler, The Cancer Poetry Project, and Open to Interpretation: Intimate Landscape. She has been interviewed by The Missouri Review as part of its Working Writers Series and was a guest blogger for both Battered Suitcase Press and CaringBridge.org.

Additionally, in 2013, she was part of the University of Wisconsin—Eau Claire’s Blugold Visiting Writers Series. In 2014, her first collection of stories, Six Months in the Midwest, was published by Unsolicited Press. Currently, she teaches English full-time at Hennepin Technical College and lives in an old Minneapolis upper with her books and records and dresses.

Six Months in the Midwest Trailer
Wanna get a hint about this book? Watch the stunning trailer!

Reviews of Six Months in the Midwest by Darci Schummer

You have subscribed to alerts for Darci Schummer.

You have been added to Darci Schummer's favorite list.

You can also sign-up to receive email notifications whenever Darci Schummer releases a new book.