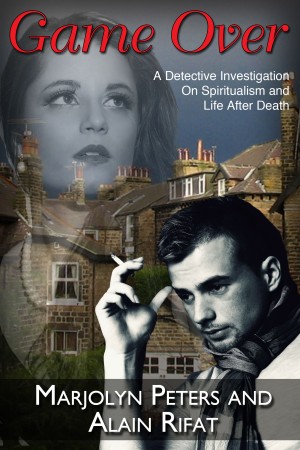 Game Over: A Detective Investigation on Spiritualism and Life After Death.

By Alain Rifat
& Marjolyn Peters
Trying to understand why Conan Doyle became a convinced Spiritualist, a detective witnesses a fierce war between Science and Religion that ends with a suspicious death and three suspects.Through the investigation in a spooky Victorian mansion and a passionate love affair, the reader discovers how mediums communicate with passed entities and what Science has to say about the nature of our reality. More
GAME OVER:

A Detective Investigation on Spiritualism and Life After Death.

Through a fictional and entertaining detective investigation, the reader is introduced to the Spiritualist environment: its procedures and its convictions. Science and Spirituality are confronted through a fierce battle between an eccentric French engineer and an old British plumber who is a convinced Spiritualist and a wise humanist. An attractive young woman meets a handsome American, medium himself and traumatised by his war experience in Afghanistan and Irak. They complement themselves in a romantic but weird relation that triggers strange memories in both of them. Are they mere hallucinations? Or rememberings of past lives? Are we responsible in this life for events happened in past ones?

A suspicious death staggers everybody but leads slowly to amazing and unexpected revelations that should trigger the reader's interest in the investigation and in its implications on the most important question of all: what happens after death?! Could modern Science contribute to an understanding of the mediums' claims? Or is there really an unbridgeable gap between matter and spirit? These are some questions that are tackled beside the obvious one in a detective story: Who's done it?!

Everybody, one day or another, thinks about one's life and its ending. And the most important question of all… What comes after?!

Many answers are available, of course… But which one is convenient for you? Maybe your life and thoughts convinced your mind and your feelings of an adequate answer. Maybe you don't yet have one.

The authors of this book met during a workshop in a College dedicated to Spiritualism which is one of the available answers. It states that consciousness survives bodily death but, contrary to most Religions, it looks for experimental evidence to support its claim. Mediums are formed there and learn how to perceive messages and informations supposedly coming from passed spirits. They are trained to give clear and specific informations in order to identify a recognisable individual, then eventually transfer a message coming from this passed entity and emanating from a so-called other world.

We experienced amazing events and analysed them with critical eyes but open mind also. They triggered the idea of this book: an investigation conducted by a down-to-earth police officer fond of Sherlock Holmes and his creator: Sir Arthur Conan Doyle, who was a renown Spiritualist himself! The detective is intrigued and tries to understand how the father of Forensic Science and an analytical genius, could be convinced by the Spiritualist claim!

Conan Doyle wasn't, by far, the only analytical mind open to Spiritualism; many respected scientists — even Nobel Prizes — conducted experiments and worked on these questions. Some of them even created experimental protocols designed to give hard evidence of life after death. Frederick Myers: one of the founders of The Society for Psychical Research, was one of them and his work inspired part of this book.

I love Science! Language and the scientific methodology are maybe the most impressive creations of our species and are part of humankind's specificity. We have an innate need to understand the world in which we are born and the scientific way is particularly powerful since it incites us to build an image, a model of the world we live in. And science invites us to continuously verify the relevance of our world's image by looking for evidence, usually through analysis, experiments and observations.

To be amazed; to ask oneself questions; to imagine answers and to put them to test… To build one's own rational conviction, the feeling to understand something fundamental about our world. This procedure seems to us so natural today that we tend to forget that Science is young; a little less than four centuries only!

Science was created by philosophers who were looking for objective and verifiable knowledge. But unfortunately sometime the open-mindedness of its creators is lost; conservative and critical mind takes its place and Science can become as dogmatic as a Religion! Yet God knows that she doesn't deserve such a fate!

I followed a scientific path, guided by an interest about the nature of the world and life. I studied Biology then graduated in Molecular Biology and finished a phD in Molecular Genetics. I tried to follow the discoveries in Cosmology and Quantum Physics and to appreciate Life through space and time; that is to say Life's history: evolution; and its fabulous entanglement in an impressive Biosphere: ecology.

My path led me to discover the psychic world's strangeness: intuitions, premonitions, transpersonal communication… that aren't a priori understandable through the common image of the world: the common paradigm which is Physicalism. This paradigm states that only matter is real and builds the world.

This paradigm arose mainly in the 19th century. But it still lags today even if modern Physics has shown since the beginning of the 20th century, that what we call real, hasn't the properties we currently attribute to reality! The new paradigm we have to build nowadays could very well unveil a reality closer to what we think belongs to a spiritual realm than to a material one only!

I tried to follow the scientific methodology to build a rational conviction. And today I'm convinced that consciousness can evolve outside the space and time restrictions that are the ones in which our body lives. Physicalism just can't explain what consciousness is able to do!

We're on the cusp of a new Renaissance that should enlarge our perspectives and bridge Science and Spirituality. It's with this view that we had the idea of this book: an easy to read detective novel that plays with some reflexions on the way to a new paradigm. One that should give us a new world's image, best adapted to modern science's and psychophysics' discoveries.

You have subscribed to alerts for Alain Rifat.

You have been added to Alain Rifat's favorite list.

You can also sign-up to receive email notifications whenever Alain Rifat releases a new book.