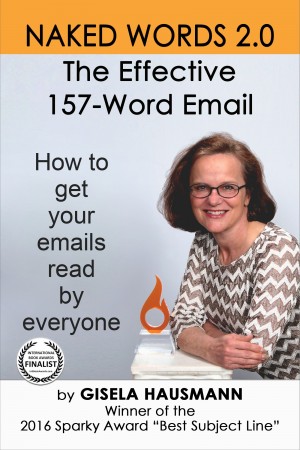 Email subject lines vs. elevator pitch
Today, learning to write a subject line that will get your recipient's attention can be more important than practicing a perfect elevator pitch. Just ask yourself: How often do you pitch, and how many emails do you write? In fact, you may have to send an email to even get the opportunity to present your elevator pitch.

The analysis of email marketing 2015 also demonstrated a new trend - most business people do not like to pick up the phone any longer, but they read work-related emails on their phones, before and after business hours.

A perfect marketing email with an attractive subject line sent at 6:30a.m. might prompt a reply even before start of the business day, because the recipient read the email on his/her commute.

In her book "NAKED WORDS 2.0 The Effective 157-Word Email," email evangelist Gisela Hausmann offers a trick that will make any subject stand out in your recipient's Inbox!

*"Naked Words 2.0" is the book to read if you want to maximize your chances of getting media features, sponsor ships, or any other type of opportunity. If an employee is looking to advance their career or an entrepreneur is looking to build rapport with influencers, their next step should be buying this book."
Kallen Diggs, International Bestselling Author & Huffington Post Columnist

Email marketing demystified Email evangelist Gisela Hausmann analyzed 100,000+ emails for effectiveness and personal appeal. This extensive research helped her to create a system to improve each of the seven parts an email. In her book, she reveals how to compose an attention-getting subject line, offers tricks to keep emails short and concise, gives the scoop on which words to avoid at all costs, and provides much more.
Even if you apply only two or three of the tricks in this book, you'll see an immediate improvement in response times and response rates.

*"In today's hectic world email is still the most direct way to share your message. Naked Words is a fantastic book that will show you how to get your message read and acted on."
Brian Burns, Host of "The Brutal Truth About Sales & Selling" - PodCast

"Naked Words 2.0 The Effective 157-Word Email "is the ideal resource for

Twenty-three illustrative pictures serve as examples of the good and the not so good. Clearly labeled action steps also ensure you know exactly what to do and when to do it.

Her motto:
"Don't wait. The time will never be just right."-Napoleon Hill

Gisela Hausmann is an email evangelist, a PR coach, a communication expert and a life skills artist.

Born to be an adventurer, she also co-piloted single-engine planes, produced movies, and worked in the industries of education, construction, and international transportation. Gisela’s friends and fans know her as a woman who goes out to seek the unusual and rare adventure.

Gisela Hausmann graduated with a master’s degree in Film & Mass Media from the University of Vienna. She now lives in Greenville, South Carolina. She tweets at @Naked_Determina

You have subscribed to alerts for Gisela Hausmann.

You have been added to Gisela Hausmann's favorite list.

You can also sign-up to receive email notifications whenever Gisela Hausmann releases a new book.