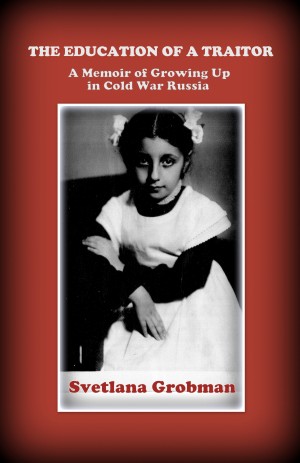 The Education of a Traitor: A Memoir of Growing Up in Cold War Russia

By Svetlana Grobman
Rated 5.00/5 based on 1 review
The Education of a Traitor: A Memoir of Growing Up in Cold War Russia is a luminous memoir that describes the coming of age of a young Jewish girl in an oppressive totalitarian society rife with hypocrisy and Antisemitism. More
Svetlana (Sveta) Grobman grew up in a communal apartment in Moscow, Russia, during the Cold War with her mother, father and younger sister. From a very young age, she found herself living in two contradictory worlds: the private world of a Jewish family struggling to live a decent life in a society rife with shortages and anti-Semitism; and the public world of an oppressive totalitarian regime that brainwashed its citizens into believing that the Soviet Union was the best country in the world.

Despite being constantly bullied and insulted by playmates, neighbors, and teachers, Sveta was a dreamer. In the confinement of her cramped apartment, with a book in her hands, she dreamt about doing something significant for her country to earn its love and respect. Yet as Sveta matured and learned about the persecution of her family and the tragic deaths of her Ukrainian relatives during WWII, she realized that the world around her was built on lies and corruption, and that she needed to be strong just to survive.

Composed of a series of poignant and sometimes humorous stories, The Education of a Traitor is a luminous memoir that not only describes the experience of one Jewish child coming of age at the height of the Cold War, but also helps explain why millions of people chose to leave the Soviet Union when the Iron Curtain finally fell.
Available ebook formats: epub mobi pdf rtf txt html
First 15% Sample: epub mobi (Kindle) Online Reader
Price: $3.99 USD
Buy Add to Library Give as a Gift
How gifting works
Create Widget
Tags: coming of age history memoir russia europe russian european jewish life antisemitism in ussr
About Svetlana Grobman

Svetlana Grobman is a Jewish immigrant from Russia who was born in Moscow in 1951. She moved to the United States in 1990. While living in Russia, Grobman was an engineer and an editor for the Soviet Encyclopedia. Now, she is a librarian and freelance writer living in Columbia, Missouri. Grobman has published articles and personal stories in a variety of places, including the Christian Science Monitor, the St. Louis Post Dispatch, Rural Missouri, and Chicken Soup for the Soul. The Education of a Traitor: A Memoir of Growing Up in Cold War Russia is Grobman’s first book, and she is currently working on her second. To learn more about Svetlana’s experiences in Russia and the U.S., subscribe to her blog at http://svetlanagrobman.com.

Reviews of The Education of a Traitor: A Memoir of Growing Up in Cold War Russia by Svetlana Grobman

Grobman is a gifted story-teller, and "The Education of a Traitor" reads like a collection of short stories, in the tradition of Chekhov or James Joyce's "Dubliners." At this basic story-telling level, "Education of a Traitor" is an often touching, sometimes humorous, account of a sensitive girl growing up in trying circumstances. But her personal story also has broader historical significance. Grobman did not suffer the horrendous treatment of Soviet-era dissidents and refuseniks: she was not tortured; she did not go to prison. But she did experience the cramped living quarters, the chronic shortages, the endemic antisemitism, and the political repression of Cold War Russia. So, just as James Joyce's "Dubliners" illustrated "the paralysis of a city," "Education of a Traitor" illustrates the paralysis of the Soviet empire during its declining years.

You have subscribed to alerts for Svetlana Grobman.

You have been added to Svetlana Grobman's favorite list.

You can also sign-up to receive email notifications whenever Svetlana Grobman releases a new book.