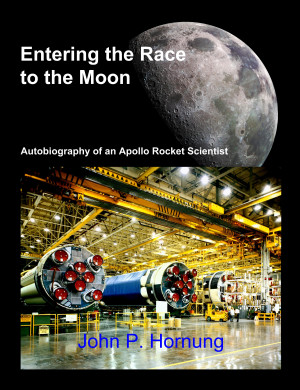 By John P. Hornung
Rated 5.00/5 based on 1 review
This is the autobiography of a rocket scientist during the early years of NASA’s Apollo Mission to the moon. This writing describes four chapters of his life. Three were significant in U.S. history; early school integration in the deep south, a period of brutality in the Marine Corps, and the race to land a man on the moon. A fourth chapter includes short stories of his Sea Scout adventures. More
This is the autobiography of John P. Hornung, a rocket scientist during the early years of NASA’s Apollo Mission to the moon. The writing describes four chapters in his life. Three of them were selected for their significance in U.S. history; early school integration in the deep south, a period of brutality in the US Marine Corps, and landing a man on the moon. A fourth chapter includes short stories of John’s Sea Scout adventures.
Chapter 1 - The Silent Aftermath
In the mid 1950s, a battle bubbled to the surface between a group of Catholic intellectuals, intent on removing segregation in New Orleans Catholic schools, and their formidable segregationist foes. In the battle’s aftermath was a wake of difficult challenges my family had to face. This is the account of the attempt to understand the consequences of this epic struggle. The story begins with the description of the Hornung sibling’s unusual childhood and the puzzles that surrounded it. More than fifty years later, the Silent Aftermath unraveled shocking discoveries of the mystery behind the difficulties we siblings encountered and the battle to integrate New Orleans Catholic schools.
Chapter 2 - Abandon Ship!
Here is a collection of short stories of my teenage adventures in the Sea Scouts. The stories include: a harrowing attempt to survive a severe storm at sea; an unusual way of winning first place in a Boy Scout District Camporee; an encounter with the US Army; and what it was like to attend a colorful Boy Scout World Jamboree. While being adventurous and fun loving, we took our seamanship seriously and met challenges in a responsible manner. These stories are filled with wit and humor. Every time I read these adventures I laugh out loud. Maybe you will too.
Chapter 3 - Private 1543868
I enlisted in the U.S. Marine Corps in my junior year of high school. While I found my platoon’s experiences during Marine Corps boot camp to be brutal at times, I learned a half century later they were the dark side of Marine Corps life. Although recruits experienced the blunt force of the dark side, they and the public were not aware how entrenched it was from the 1950s thru the mid 1970s. This came to light only after I read the book “see Parris and Die – Brutality in the U.S. Marines”, while researching material for this chapter. This is the story of my encounter with the dark side and my attempts to survive it.
Chapter 4 - To the Moon without Me
After I graduated from college in 1963 I was hired by the Chrysler Corporation Space Division. The company constructed the first stage of NASA’s Saturn IB Space Launch Vehicle at NASA’s Michoud Rocket Plant in New Orleans, Louisiana. Eventually, I became a Reliability Engineer working in an organization that was the first to develop the mathematics and techniques of Artificial Intelligence. This technology was applied to deciphering the weak points in the Saturn IB rocket's design.
The Saturn IB was critical to achieving the goal of landing a man on the moon and returning him to earth because it was NASA’s workhorse in testing components of the giant Saturn V and its payload to the moon. It launched and tested the Saturn V’s third stage the Saturn IV-B, the Apollo spacecraft, the Saturn’s brain, and the lunar lander. The testing culminated with the Saturn IB’s launch of Apollo 7, the first manned Apollo spacecraft. With the very next mission, Apollo 8, the Saturn V headed to the moon.
In this chapter I write; of what I did after discovering that imaginary numbers were missing, of an incident that may have led to my arrest, of my attempt to discover what went wrong during a critical test of the Saturn IB’s superstructure, of the little known facts surrounding the fire atop Saturn IB 204 which killed three astronauts, and, of the unseen test flights of the Saturn IB. This is the story of my exciting and demanding career in the race between the United States and the Russians to be the first to land a man on the moon.
Download: epub mobi (Kindle) pdf more Online Reader
rtf lrf pdb txt
Price: Free! USD
Add to Library
Create Widget
Tags: boot camp black history boy scouts parris island saturn 1b rocket scientist reliability engineering nasa apollo program integration new orleans world jamboree
About John P. Hornung

John was born in New Orleans, Louisiana. He received his BS in Physics from the University of Louisiana, Lafayette in 1963, and was a member of the Sigma Pi Sigma Honorary Physics Fraternity. John obtained a Masters of Public Administration from The American University in Washington, DC.

On graduation from college, John was employed by a private firm at NASA’s Michoud Rocket Plant in New Orleans. The company constructed the first stage of the Apollo Saturn IB Space Launch Vehicle. As a Reliability Engineer, John worked with an organization that was the first to develop the mathematics and techniques of Artificial Intelligence. This technology was applied to deciphering the weak points in the Apollo Saturn IB rocket's design. In 1966, John was employed by a research firm which conducted military war games and advanced research for the U.S. Army Combat Development Command. He spent a short period in VietNam as a consultant to U.S. Army Headquarters at Long Bin. In 1971, John was hired by Headquarters, United States Post Office Department, Washington, DC. There, he led research and development programs and rose to Deputy Director, Office of Statistical Programs and Standards. In 1978, he took a position with Headquarters, U.S. Customs Service, Department of The Treasury. In 1993, while Director of the Agency’s Computer and Telecommunications Security Program, John received the Department of the Treasury's National Telecommunications and Information Systems Security Award, in recognition of his Program’s outstanding contributions.

John lives in Williamsburg, Virginia and is a member of the Virginia Writers Club.

Reviews of Entering the Race to the Moon - Autobiography of an Apollo Rocket Scientist by John P. Hornung

Review of book by John P. Hornung…
John Hornung has written a fascinating autobiography about mysteries that lingered on his mind for decades while growing up in segregated and desegregated New Orleans. He paints a picture as a young boy witnessing the battles and secrets among intellectuals, public and ecclesiastical administrators, teachers and students caught in the boiling cauldron of equal educational rights of the 1950s and 1960s. John was produced by two university academics, devout Catholics, a patriarchal head of household who imposed extremely difficult and nearly impossible disciplinary rules, highly restricted, regimented regulations; often impossible for him and his siblings to understand, and much less follow and obey this dysfunctional form of parenting. Disobedience usually led to corporal punishment. The mother, who deeply loved her family, was a highly respected medical scientist and academician, a university professor who was determined to keep the family together and functioning, despite the dominating and dogmatic personality of the husband/father. She juggled family life with research and teaching, while both parents were involved in the intellectual desegregation movement of the city, (although often clandestine; nevertheless, risking physical/harmful threats to themselves and their children).
The author leaves the family home when he was a high school junior to enlist in the Marines. Experiencing the brutality of boot camp makes one suspect that he had jumped from the frying pan of his upbringing at home and daily severe conflicts with the father, into the oven. He describes captivating military experiences and how he was able to achieve equanimity during his enlisted struggles.
John Hornung was a pioneer rocket scientist in the space development program. One gets engrossed by his contributions to the program and interactions with others/colleagues at various levels. The graphics in the book should be of interests to physics and space scientists. He worked among the first rocket scientists to develop the mathematics and techniques of artificial intelligence, applying the technology to untangling the weak points in design of the Saturn IB rocket.
Overall, the autobiography is an absorbing story about the life of a native New Orleanian, despite a very difficult upbringing (yet sometimes tumultuous) achieving success, while involved in a challenging role as a physicist-rocket scientist during the race to be the first to reach the moon between the USA and Russia.
This is a worthwhile and enthralling book to read.
Gerald J. Domingue
Professor – Doctor Emeritus
Zurich, Switzerland

You have subscribed to alerts for John P. Hornung.

You have been added to John P. Hornung's favorite list.

You can also sign-up to receive email notifications whenever John P. Hornung releases a new book.