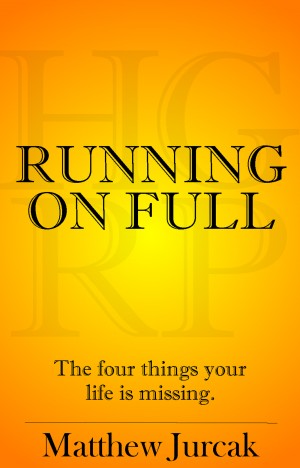 By Matt Jurcak
Rated 2.00/5 based on 1 reviews
Violence, an increasing trend in the US and across the world, is a humanly transmitted disease capable of immense destruction. Running on Full shows us how we can actually leverage our actions to revive core human values in our extremely dynamic society. More
WARNING: Not all people will agree with every detail presented here, but many to most will support the main points described in this book which works solely to help society create a better world in an increasing age of violence.
There are no wizards, no vampires, and certainly no shades of grey in this book. But there is a striking plot with exciting twists, interesting discussions, and many lessons learned. This story begins with today, with your life, and the wager on humanity. Every day you are exposed to an everlasting playlist of music, bombardment of advertising, and string of movies, all popularized by the daily news. Based on what society often portrays through drug-glorifying music, deceitful television, violent movies, and terror-induced news, our world is a very dangerous place. We delve into these sources of excitement that are riddled with malice, and our fascination with these poor ethics leads to the crumbling expectations of humanity. On top of that, our most vulnerable population, the kids, experience more violent negativity than genuine beneficence on a daily basis. Youth and adults alike, in all social classes, continue to slip into the realm of violence, crime and drugs.
This book explains the importance of four main character traits (happiness, generosity, respect, and passion) and shows how we, as one community, can actually leverage them to revive core human values in our extremely dynamic society. A person is Running On Full when that person fully demonstrates all four traits on a daily basis, positively shaping his entire character and therefore positively affecting those around him. “We” is a thousand times more powerful than “I”. Be a part of this.
Download: epub mobi (Kindle) pdf more Online Reader
rtf lrf pdb txt
Price: Free! USD
Add to Library
Create Widget
Tags: change murder help happiness violence world society violence against women better place
About Matt Jurcak

My name is Matt, and I’m an enthusiast. Yes, I enjoy many, many things, because I know this life is short and every day it goes by more quickly. I cook every day, workout most days, do yoga every night, surf, own an Android phone, enjoy designing and data, drive a 2007 Pontiac Vibe, live in a modest apartment, and overall want to help others. I always, always think of new ideas. These ideas range from simple inventions to entire organizations, but the goal always is to help people. I was inspired to write this book when one day I decided the root of most of the problems in our society was ourselves. I looked at the world around me and saw a beautiful earth riddled with vulgar and apathetic human interaction. It’s as if we no longer care about each other nor our home. So I wrote this book to generate buzz about what we can do as a society to help each other live wonderful, fulfilling lives in a great environment. With the internet and our tendency for super-connection, now may be our best shot to change some things. We live in a fantastic place, but I don’t want my future kids to curse at three years old, turn away from people who need their help, nor see the devastation of our planet. I want all of us to be Running On Full.

Lackluster ideas, and a poor attempt to present them in an entertaining fashion/self-help book style. Author attempts to coin new terms for existing concepts, and has possibly watched "Pay it Forward" one too many times.

Sad to say, but violence is part of human nature. We are animals, after all, and as such, it is hardwired into our brains. As a society, we have various forms of entertainment to take the place of, say, actually going outside and killing something. Going to a football game generates the same (or at least similar) feeling in our brain. The rush of endorphins, the excitement. All without needing to clean the blood out from under your nails. Replacement violence is good violence. Let's not take that for granted.

Pack mentality is a thing here, too. It's not so much "character transfer", as it is observing your environment and finding your place. This specifically applies as an adolescent, and can result in some embarassing attempts to fit in and/or be cool.

Get off yer high horse and deal with it. We're a bunch of monkeys in suits who go to war over the slightest perceived difference in culture. Here's the only guide we need: Be kind to those who deserve it, be polite even when they don't, hit people back when they hit you, and don't give your two year old a smart phone.

You have subscribed to alerts for Matt Jurcak.

You have been added to Matt Jurcak's favorite list.

You can also sign-up to receive email notifications whenever Matt Jurcak releases a new book.