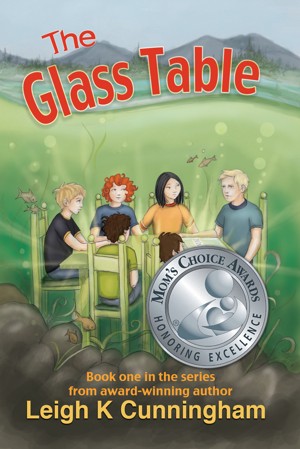 Twelve children disappear while swimming at Lake Como during the summer holidays. Cast into a spell to live as spirits in the river Kai, the children learn that it is only through trust, camaraderie, and teamwork do they have a chance to return home to their families.

The sequel, SHARDS, continues the story.

Leigh K Cunningham is a lawyer with a career as a senior executive for a number of public companies in her home country of Australia. She has three master’s degrees in law (Master of International Trade & Investment Law) and commerce (Master of Commerce) and an MBA (International Management) where she graduated as ‘Top Student’.

Leigh's other title for the adult fiction market, RAIN, won gold at the 2011 Indie Excellence Awards (Literary Fiction) and silver at the Independent Publisher Awards (IPPY) in the Regional Fiction: Australia/New Zealand category. RAIN was #1 on the Amazon bestseller list for Women’s Fiction.

THE GLASS TABLE and its sequel, SHARDS - Leigh's titles for the children's market, won silver medals at the Mom's Choice Awards (2010).

Leigh's next title, REWRITTEN is due for release in 2014.

Leigh is the founder and Executive Director for the Association of Independent Authors, a global membership organization advancing the interests of self-published authors.

Video Book Trailer
Twelve children disappear while swimming at Lake Como during the summer school holidays. The police and community fear the worst.

The Glass Table
When twelve children disappear from Lake Como during the summer school holidays, the police chief is baffled. There are no clues and no witnesses, even though the camping grounds are overflowing with holidaymakers and the children disappear in broad daylight. Mystery/thriller with environmental theme.

Also in Series: The Glass Table

You have subscribed to alerts for Leigh K Cunningham.

You have been added to Leigh K Cunningham's favorite list.

You can also sign-up to receive email notifications whenever Leigh K Cunningham releases a new book.