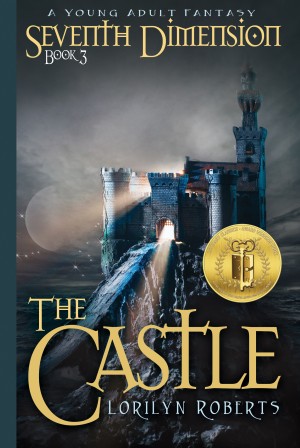 But the stakes are raised when he witnesses the trial and crucifixion of Yeshua. The convergence of time with supernatural events creates a suspenseful ending and leads to the fourth book in the Seventh Dimension Series, The City, Book 4, A Young Adult Fantasy—available 2016.

Lorilyn Roberts is a Christian author who writes for the young and young at heart. The Seventh Dimension Series is now complete. The six books are as follows:

The complete boxed set is available from her website at http://LorilynRoberts.com.

When not writing books, Lorilyn provides closed captioning for television.

Lorilyn is the founder of the John 316 Marketing Network, a network of Christian authors who are passionate about promoting books with a Christian worldview.

About the Series: Seventh Dimension

Where the spiritual world becomes a reality in an alternate universe.

I am a fan of the Seventh Dimension series of Christian supernatural thrillers from Lorilyn Roberts, and her latest, “The Castle,” is the best.

Like its predecessor, “The King,” it relates the story of Daniel, a young Jewish man from present-day Jerusalem who enters the seventh dimension, where, as a friend tells him, “time is an illusion.” He finds himself in first-century Palestine and a witness to events surrounding the arrest and trial of Yeshua (Jesus).

These scenes occupy roughly the first half of the book, and in many respects they are the most gripping part of the whole drama. Though we know of course that Yeshua is going to be betrayed and convicted, we still share the profound sense of apprehenson and horror experienced by Daniel as he watches the events unfold right before him.

At the same time, extra tension is injected to the proceedings because we are aware that Daniel himself is in danger, as he is wanted by the Roman authorities and has escaped from prison.

And in this superbly written multi-layered book there is even more. For overshadowing everything is our knowledge that present-day Daniel is searching for his father, who disappeared while on a business trip. It seems that perhaps he is being held in a mysterious castle, somewhere far away.

I enjoy historical fiction, and was impressed by the skilful way in which the author brings Palestine to life. One moment we are in a Roman prison, then we are in the temple in Jerusalem, watching Yeshua argue with the merchants. We are in the Garden of Gethsemane when the guards arrest Yeshua (and almost arrest Daniel). We are at Golgotha as Yeshua dies on the cross.

I was happy that the author resisted the temptation to hurry the action along. So we have time to look around, to hear the sounds and smell the fragrances. We feel we are there.

The book becomes darker towards the end, and without giving too much away, there are further encounters with Yeshua that are straight from the Book of Revelation. And here Daniel learns something about his father, and understands that he has been chosen for a special mission. It is a dramatic ending that sets us up for the next book in the series.

You have subscribed to alerts for Lorilyn Roberts.

You have been added to Lorilyn Roberts's favorite list.

You can also sign-up to receive email notifications whenever Lorilyn Roberts releases a new book.