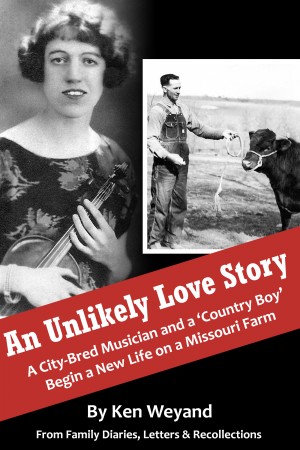 An Unlikely Love Story: A City-Bred Musician and a 'Country Boy' Begin a New Life on a Missouri Farm

By Ken Weyand
Sometimes two people from seemingly opposite backgrounds find each other and build a successful life. Ken Weyand tells how his mother, a city-bred only child who became a musician, met and married his dad, an orphan who was following his late mother’s dream to be a farmer. Ken uses diary entries, old family letters, photos and personal recollections to trace his parents’ unique journey. More
"An Unlikely Love Story: A City-Bred Musician and a 'Country Boy' Begin a New Life on a Missouri Farm" traces the backgrounds of Ken Weyand's parents, a city-bred only daughter who became a musician, and an orphan boy who was following his late mother's dream to become a farmer. Ken recounts his mother's Chautauqua experiences, including her stint as one of the "Lassies" with "J. Coates Lockhart and His Scotch Lassies" and other troupes during the 1920s. He tells of his parents' chance meeting, year-long courtship, and marriage in the middle of a Midwestern ice storm, and continues with their struggle to remodel an old farmhouse and develop a productive Missouri farm during the Great Depression.

There are stories of his mother's struggle to cook for threshing crews, her efforts to make extra money raising chickens and selling eggs while giving piano lessons to rural children, and her efforts to cope with rural isolation. There are accounts of unique road trips, battles with mud roads, births of farm animals, and much more.

After receiving a degree in Journalism at the University of Missouri, Kenneth Charles Weyand worked ten years for the "Kansas City Star", becoming Advertising Copy Chief. Later he published several publications, including "Discover North", a monthly history and travel newspaper. After expanding the distribution from a single county to more than nine states, Weyand sold the publication in 2001, but continued to write for the paper, renamed "Discover Vintage America". For the past ten years, he has written a monthly history and travel column, “Traveling with Ken.”

"Fiddling with Friends in the 1920s: A Chautauqua Trouper’s Story" is Ken's first book, capturing the life of his mother who, as a young woman, left her small town behind for a great adventure and a chance to get a first-hand look at a changing America in the early 20th Century. A much larger book, "An Unlikely Love Story," tells the unique story of two people from vastly different backgrounds who overcame great odds to begin a new life in the country during the depths of the Depression.

The author's own remembrances of a country life are recounted in "Dirt Road Diary: Recalling a Country Childhood." It picks up where “An Unlikely Love Story” leaves off, and includes a lot of country-style memories. Both books will be published in the near future.

Another book, "Early-Day Flying in Kansas City", based on a similar history published in 1970 and including material not in the original book, was released in October 2015.

Weyand’s passion is kayaking, particularly in Florida. He is currently working on two eBooks on kayaking, both non-fiction, and plans to release them in the near future.

"Lost in the Everglades and Other Florida Paddling Adventures" recalls a harrowing experience, but is balanced with other experiences that were equally adventurous but more successful. If you’re a paddler or would like to be, you’ll enjoy reading this one.

"A Florida Paddling Bucket List" is currently being compiled for paddlers (and would-be paddlers) looking to make the most of their free time on Florida rivers, creeks and estuaries, with helpful tips on where to launch and take out, and what to expect at each location. Factoids of local history are included.

You have subscribed to alerts for Ken Weyand.

You have been added to Ken Weyand's favorite list.

You can also sign-up to receive email notifications whenever Ken Weyand releases a new book.