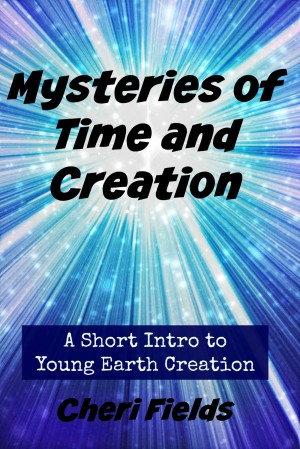 Mysteries of Time and Creation

By Cheri Fields
Rated 3.33/5 based on 3 reviews
In just a few minutes you can discover the foundations of origins science many people trust. Ever wonder why museums, books, and TV are so sure about evolution and millions of years? Want to know what Jesus thinks about this idea? This short introduction to Young Earth Creation for kids will give you the basics, from Genesis to radiometric dating, the Ice Age to natural selection. More
"Highly readable and informative! Written in Cheri Fields' enthusiastic conversational tone, kids are challenged to reconsider the foundation of some popular, but rather unfounded scientific ideas which are circulating in our time. Bravo!!!" ~Judeen Garza, Director of Bright Star Ministries, Caring for widows and orphans in Kenya
"This is a good book for kids. You kept it simple and understandable." ~Dr. Carolyn Reeves, coauthor of Investigate the Possibilities: Elementary Earth Science series and The Big Book of Earth and Sky
My daughter had a 10 year old friend who comes to church when her grandma could get her there. She is sweet, loves Jesus, and only learns about the nature of the world from public school and what she can discover for herself in her Bible. There is a wealth of creation information for adults online, but very little for kids, especially when they are old enough to understand big ideas but don't have adult reading skills yet. I wrote this book to give kids like her a taste for the answers creation scientist have for how science fits beautifully with God's testimony of how and when He created the world.
Most materials for kids don't tell them why they believe the world is billions of years old. They sure don't tell them what you have to believe in for evolution to make sense. In this mini eBook, you will learn about the assumptions scientists must make in order to find deep time and a single common ancestor.
In a few, easy to read pages, you will learn
• The precision behind radiometric dating along with the ideas that cause them to see such ancient dates.
• The best evidences for an old earth and for a young earth.
• Bible passages that clearly show what God himself thinks about how long he took to create the world.
Did you know the sea floor tells us a lot about how old the earth can be? Or that the 10 Commandments proclaim God didn't take billions of years to make everything? Even dinosaur fossils hold evidence that they weren't buried millions of years ago.
For those hungry to learn more, the back of the book includes links to a search engine just for studying creation.
Cheri Fields has been teaching kids to read since her teens. To help kids even more, she earned a degree with honors from the Institute of Children's Literature. She is also a creation science super fan. Combining these skills, she has been running the website Creation Science 4 Kids for over three years. Her work has been featured on Creation Ministries International and The Creation Club.
Besides saving money to take her husband and six kids (and counting) on missions trips, her goal is to get pictures with and thank as many creation scientists as possible.
Available ebook formats: epub mobi pdf rtf lrf pdb txt html
First 20% Sample: epub mobi (Kindle) lrf more Online Reader
pdb
Price: $3.99 USD
Buy Add to Library Give as a Gift
How gifting works
Create Widget
Tags: christianity bible dinosaurs prehistoric creation science genesis kids 8 and up age of the earth origins science
About Cheri Fields

Cheri Fields is a creation super fan, kids' writer, and homeschooler. She started Creation Science 4 Kids.com in 2012 because she wanted to tell kids, "Isn't God amazing?!!!" when writing about science. Her background in a medical family gives her a strong vocabulary and familiarity with scientific writings, while teaching kids to read gives her an awareness of the words kids are familiar with.
Besides uncovering fascinating topics from the world around us herself, Cheri takes great joy in introducing others to the awesome creationist people, books, and resources she finds.
She is a writer for the Creation Today Show, a board member of Creation Summit, has been interviewed on the Scripture on Creation radio show, and has been published on Creation Ministries International's website. Besides her website, you can also find her on iTunes with her podcast the Creation Science 4 Kids Show: https://itunes.apple.com/us/podcast/c...
When Cheri isn't staring at her computer surviving a Michigan storm, she's dragging her seven kids out for a nature walk, or discussing the Bible with her minister husband.

Reviews of Mysteries of Time and Creation by Cheri Fields

I enjoyed this work. The author presents many examples from the realm of science that expose some of the flaws with the big bang theory and evolution. It is clear that the author is not averse to scientific concepts and ideas. The Bible is referenced, but many times it is to demonstrate how the topic fits well with things that are discussed in the Bible such as the unmistakable nod to redshift as a result of God's stretching out the heavens.

This is a lively, readable and comprehensive introduction to creation science for young minds. In a short space it covers numerous aspects of creation science and all the essential areas of controversy including the Big Bang, abiogenesis, uniformitarianism and the distinction between upward Darwinian evolution and information-culling and -sharing mechanisms like natural selection and adaptation. It also references more specialist areas like epigenetics (without mentioning the word), causes of the ice age, and genetic load. Many scientific evidences for a young earth are mentioned, including the fairly recent helium diffusion experiments which have pointed to an earth age of around 6,000 years.

In my opinion this e-book is the perfect antidote to the barrage of evolutionary, millions-of-years propaganda with which children's minds are deluged via media, schools, museums and other sources. It will teach them to trust God and his Word rather than the atheism-based speculations of secular science, and give them confidence that those speculations have been refuted by competent scientists who have put their faith in God. The links to creation science ministries may be a bit indigestible for children, but the children will know detailed answers are there for when they get older, and there is no need for them to quail before an atheist in a lab coat!

Instead of trying to actually explain anything, all you'll find are the usual twenty-or-so bible quotes. No conjecture. Nothin'. Trying to convert some young, impressionable childred? You'd likely do better making something up on the fly.

You have subscribed to alerts for Cheri Fields.

You have been added to Cheri Fields's favorite list.

You can also sign-up to receive email notifications whenever Cheri Fields releases a new book.