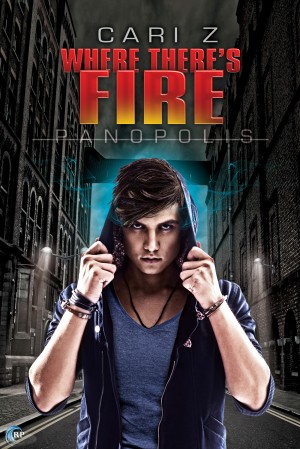 But it’s not all doom and gloom. My skills are improving every day, and Raul—aka the Mad Bombardier—and I have never been happier. That is, until my first solo job is interrupted by a mysterious woman who tells me that Raul has been kidnapped by a ruthless new Villain. The only way to free him is to do a job for Maggot, a man with scary ideas and an even scarier superpower.

I can’t go to the cops or a Hero for help. Odds are they wouldn’t listen to me anyway. If I fail, Raul will be killed. If I succeed, we’ll both be bound to a man who’ll stop at nothing to put Panopolis on the path to civil war.

It looks like the only way to win is to take out the competition.

About the Series: Panopolis

You’ve got to wonder, why would anyone ever want to move here?

And once they get here, why would they ever want to stay?

Maybe for the excitement of watching real super-powered Heroes battle it out with Villains every day—preferably from a few hundred yards back. Maybe for the chance to become one of those Heroes, brave and stalwart and always doing the right thing.

Or maybe . . . just maybe . . . some people stay because they prefer to take their chances with a Villain or two.

The series took a step up in tension, deeper in the Panopolis history and current situation, not just for Villains or the ones who wants to be one. Maggot is a Villian in all sense, and his sidekicks are sick, cruel and know how force people to do what they want.

In the first book, Edward was the powerless, and now, he must be strong for both, he and his boyfriend. Is his moment to shine and show what he can do, even wnen he is not in full control of his power. And, as a Hero, he struggles.

The ending (which I will NOT spoil, I´m not so cruel) was a big surprise, because the situation was one I didn´t saw had any exit, but then... Wow. Wow, character, wow. And then the rest of the things, which finished in the kind of ending preluding a great third book. Book I want to read ASAP.

You have subscribed to alerts for Cari Z.

You have been added to Cari Z's favorite list.

You can also sign-up to receive email notifications whenever Cari Z releases a new book.