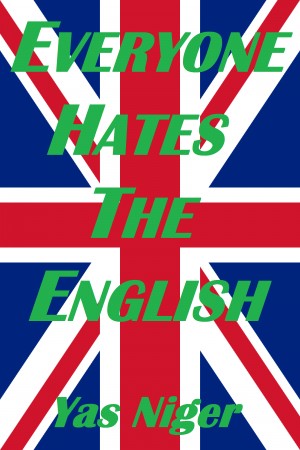 Everyone Hates The English

Hating something or someone means being highly peeved and greatly upset by them, such that it causes discontentment and makes one continuously unsatisfied by these things or persons. It is a marginal feeling that builds into an extreme angered state, a perpetual disgruntled condition.

Everyone experiences this disappointed state of unfulfilled expectations for varied emotional, social, economic, political, cultural and religious reasons. As diverse as our reasons for hating others may appear to be, they all share two things in common. The majority of reasons people get offended and angered are personal to others and trivial to them. These are reasons enough to understand and respect others, or simply just to laugh at our reasons for hating others. But not to summarily hate others because they are different or because we are just as different too.

Yas Niger is a Nigerian writer and poet with progressively traditional views. A trained educationist, activist and social media commentator who writes fictional works on contemporary African and world issues, advocating civilized virtues. With a preference for simple poetry and unconventional literary prose, he writes in a removed assertive manner, reflecting on everyday secular relationships.

Reviews of Everyone Hates The English by Yas Niger

It is a fascinating tale of a culturally engaged street corner preacher, a usually misunderstood necessary oddity in major metropolises built upon colonial legacy - where the non indigenous culturally marginalized, some of them forcibly brought to build the same thing they, now, are blamed to have polluted. It is, a story said from its characters and supporting onlookers’ perspective, an insightful fiction.

The character development focused on three actors who kept on yanking the story into motion. It is like a pyramid standing on Leroy Freeborn - a self-anointed ambassador of a motley group that he himself reveals his estrangement from, depending on its state of affairs – as revealed by his following statement "… I much rather say I am black and proud, than I am a proud African …" Therefore, it is safe to say that Leroy’s sense of belonging, vis-à-vis Africa, is selective, although there is a dose of Garveyism in his preaching that all black people are from Africa. His consciousness, which was supposed to be the key to his inner peace, might very well be considered as the basis of his tragic state of being.

Then comes Mrs. Gregory, the essential story spinner – a provoker Leroy couldn’t live without, who summarizes the bad and the good, the two sides of the coin, of western civilization – the target of Leroy’s preaching; and then Henry, a dog given a humane characterization, a dog with a mind, caprices, and feeling; he too helped run the story to its destination. As much as they get along, there is a deep-seated love and hate. To me, it seems that Leroy loves Barbara but hates Mrs. Gregory. On his fateful day, he accepted Barbara’s invitation - as Leroy the man, but Mr. Freeborn got ambushed by Mrs. Gregory’ Caucasian embedded anxiety about black men’s motives.

I knew, and mingled with, some Leroy Freeborns; fascinating people to be with, While perching on their stage - under the bright sun, until it is time to get home, when the sea is done swallowing the sun and the moon' reminder that it is time now to have an inner preaching with one’s pillow, to say the least, or the time to cuddle and nurture love ones; and then you wonder whether they would prefer that the sun will never set on their day to day reality. He is the man in the moon, while standing on his pedestal, fading into the ghost of his shadow just a step down from his makeshift launching pad.

You have subscribed to alerts for Yas Niger.

You have been added to Yas Niger's favorite list.

You can also sign-up to receive email notifications whenever Yas Niger releases a new book.