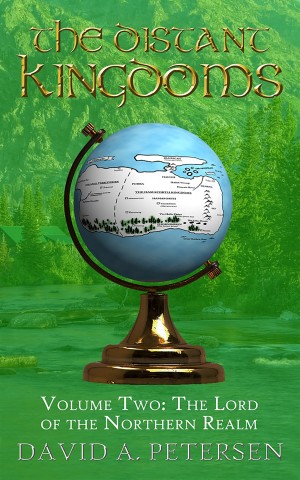 The Distant Kingdoms Volume Two: The Lord of the Northern Realm

By David A Petersen
Due to a scientific catastrophe, numerous people from a vast variety of places and various timelines have been deposited on the world of Perencore. Since arriving they have been in a constant fight for survival against an often hostile people and strange creatures. In some instances their endeavours to exist in this new environment lead them to form alliances with the planets original inhabitants. More
2020 Updated Edition

PERENCORE- A world distant from Earth.

XEROUS CITY – The capital city of Porra, the nation Colin Bourke has been sent to rule on command of his Majesty, Entell Thellon the Third.

SCATT – Self Contained All Terrain Transport.

Due to a scientific catastrophe, numerous people from a vast variety of places and various timelines have been summarily deposited on the distant world of Perencore. Since arriving, they have been in a constant fight for survival against often hostile people and strange creatures. In some instances their endeavours to exist in this new environment lead them to form alliances with the planet’s original inhabitants.

Colin Bourke has been given reign over the entire nation of Porra after his rescue of King Entell Thellon the Third’s only daughter. He travels to Xerous with a military contingent to take charge of the capital city in the wake of Lord Laninval having been deposed due to his treacherous undertakings. Once in place in this mysterious city, he discovers ruling the nation far more difficult than then he ever imagined. He seeks to make drastic, far-reaching though humanitarian changes to the draconian lifestyle of the local populace, only to be thwarted at seemingly every turn by those persons already in power.

The Bonaparte family and the Appor tribe have been beset by a plague of evil flesh-eating beings determined to destroy them. They are in a race from this threat to their very existence. Sergeant Major Walter Bradshaw and his unit of redcoats continue to traipse across the countryside and eventually put an end to a disgraceful evil. Lorraine Montague and Victor Chan continue to try and discover exactly why this scientific mishap has occurred and rectify the problem with the Minerva Project. They also become increasing involved with the local community, unawares that their good intentions will eventually lead them both into grave personal danger.

Lieutenant Gary Wyndham and his Marines are still entrenched at the homestead with the farming family. He is slowly developing a close relationship with one of the women there- although an ongoing issue threatens their relationship as well as everyone’s lives. Captain Carl Buchanan of the Union army and his band of Confederate soldiers have fled from the city of Valderhien after an ugly brawl. They find themselves constantly on the run from different local authorities as well as the Anhil, the murderous plains bandits. Soon, the Civil War squad must decide on the best course of action to assure their safety on this new world. Should they return to the site of their former battle and face the Hamaforth Kingdom’s reigning monarch who insists he means them no harm- or should they continue to elude all forms of authority?
Available ebook formats: epub
Price: $2.99 USD
Buy Add to Library Give as a Gift
How gifting works
Create Widget
Tags: space opera epic fantasy time travel other worlds kingdom fantasy futuristic worlds

Reviews of The Distant Kingdoms Volume Two: The Lord of the Northern Realm by David A Petersen