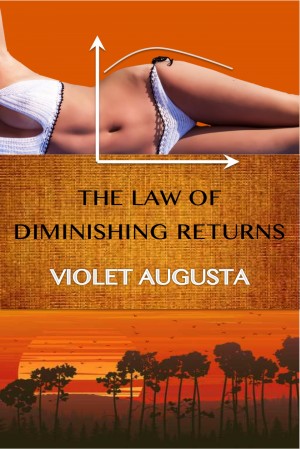 The Law Of Diminishing Returns

By Violet Augusta
Rated 3.00/5 based on 1 reviews
Meg's life is an exercise in continuous improvement, constantly striving to meet new and ambitious goals, rarely stopping to give herself credit. Vatusia's life is filled with challenges as well, but hers are primal struggles to survive-- food, shelter, clothing, and a life without violence. This is the poignant story of two women who transcend their circumstances to live a life of meaning. More
Meg Stanley is a go-getter... always has been. Her penchant to improve leads her to success at work, in love, even towards physical perfection. Together with her friends and family she experiences an entitled life, on her terms, but lacking the satisfaction she desires.

Vatusia Macon considers herself a typical, perhaps even lucky, Ivorian. Most people of her village have suffered loss, so her travails, shocking and abhorrent from a Westerner's perspective are answered with a fatalistic determination to go on. Her son is her life and reason for living above all else so her world is rocked when he is presented with the opportunity to live in the United States.

The unlikely pair are eventually united by fate, their stories interwoven like the fabric Vatusia creates to survive. Their strengths and weaknesses form the cornerstone on which a relationship that changes both of their lives is built. Along the way, we meet and learn to love and despise the people in their lives who shape and guide them in the ways of good and evil. This is the story of two fascinating women, the lives they lead and the people they touch.
Download: epub mobi (Kindle) pdf more Online Reader
rtf lrf pdb txt
Price: Free! USD
Add to Library
Create Widget
Tags: culture literature and fiction cozy fiction schizophrenia mental illness mental health friendship adventure destiny perfections and imperfections relationships and love
About Violet Augusta

Violet Augusta currently lives in the Chicago, IL area with her family. She loves food, travel, adventure and learning about new cultures and people in the process. She can be contacted at: violet.augusta7@gmail.com

I want to thank Violet Augusta for her hard work and commitment to this worthy endeavor.

The first chapter of The Law of Diminishing Returns chronicles an average afternoon in Meg’s life picking up the kids from school and taking them to their extra curricular activities. If author Violet Augusta wanted to show just how dull Meg’s life is she succeeded, but it doesn’t make for a very good opening hook.

The following chapter contrasts Meg’s life with the life of Vatusia, a single mother living in the Ivory Coast. Vatusia’s son Anjani has schizophrenia and is being treated by missionaries Ernest and Jeannie, who are Meg’s uncle and aunt. The missionaries have arranged for Anjani to go to America for treatment and schooling

Back in America a group of wives are going on vacation to Vegas where Meg’s friend Kat decides to experiment having gay sex with a stranger.

Chapter four is Meg reading emails from her uncle and aunt about the civil war in the Ivory Coast and the deteriorating conditions.

Chapter five is Kat telling Meg her marriage to Tom is at risk because she told him about having sex with a woman in Vegas. This sends Meg into deep introspection about her life – several pages of backstory that read like a year-book morphing into a job resume.

This is contrasted by the following chapter chronicling the life history of Vatusia.

And so it goes with a great deal of the story being told through emails.

Violet Augusta’s story is not very original, but really when was the last time you read an original story? It contrasts the idyllic life of Meg in America with the hardship faced by Vatusia in Africa and the gradual merging of their lives for the mutual benefit of both. Even though predictable The Law of Diminishing Returns still has a lot of potential.

The problem is not so much in the story, but in the telling of it.

Augusta’s writing is passive, the characters are one dimensional, and the narrative is bogged down in many places with huge chunks, indeed, entire chapters of backstory.

So first, let’s talk about passive writing or telling instead of showing.

If you want to engage the reader's heart, mind, and imagination, you must learn to ‘show’ rather than ‘tell’ your stories. You must devise incidents complete with specific details that show the characters’ traits in action.
Character traits are abstract and general. Behavior (action) is concrete and specific. Don t tell the reader your character is brave, show your character in a situation where he displays bravery.

There should also be a sense of immediacy in your writing with the reader feeling they’re in the middle of the action, actually witnessing or participating in the events.

Here’s and example of how the author has her main character, Meg, describe the relationship with her husband Jeff:

Their love was both comfortable and passionate, a rare combination based on what Meg knew of her friends’ marital arrangements. Jeff was a handsome, stable man who let Meg be whoever she chose to be, no matter how many times she shifted course. He had opinions, but usually expressed them without patronizing Meg.

This is classic ‘telling’ using generalization instead of specifics. The reader would have been better informed and entertained if Augusta, through action and dialogue, would have describe the passion, and even the comfort, had given examples of her friend’s dysfunctional marriages, described the features of her handsome husband, defined stable, gave of examples of who and what Meg has wanted to be in the past, and let us in on opinions her husband holds, non-patronizing or otherwise.

Other blatant forms of ‘telling’ are the author’s extensive use of emails from one character to another to advance the plot. These could be developed into scenes with action and dialogue and would have been far more entertaining than presented in this sterile manner.

Augusta’s characters are not believable. Meg’s only flaw is she smokes the occasional cigarette in the privacy of her car. Jeff is a cliché of an upper middle-class husband and father. Ernest and Jeannie, Meg’s missionary uncle and aunt are pure and good. Vatusia is the typical third world victim using her skill in traditional crafts to eke out a living and support her ever-grateful-for-the-opportunity son studying in America. The only real person is Kat, the friend of Meg’s who decides to experiment with gay sex.

When Kat confides in Meg that she told her husband and he’s upset about her infidelity, Meg asks, “Why did you tell him?” To which Kat answers, “I wanted to provoke a reaction from him.” Why did she decide to have gay sex with a stranger in the first place? “I thought I was entitled to feel good,” Kat says.

Now this is getting interesting. Why did Kat have sex with a woman and not a man, or is she unable to “feel good” having straight sex and is there maybe something Kat wants to confess to her very best friend Meg?

We never find out because Augusta kills this story line almost immediately with Meg’s advice that Kat go back to her husband and beg forgiveness, “to grovel if she has to.”

If the author is afraid to go there then why was this brief episode even introduced?

Another flaw is the author’s use of backstory, information the reader may need to know to better understand the characters and their situation.

The Law of Diminishing Returns devotes entire chapters to backstory which, besides being boring, interrupt the narrative and pull the reader out of the reading experience.
Ideally this type of information is invisible – readers learn needed facts and information without knowing those facts were forced upon them. For this to happen backstory must be timely, relevant, motivated and above all minimal.

You want to keep the story momentum going and building and avoid anything that distracts from this experience even momentarily.

These are three major writing flaws that would have been pointed out by any writing instructor, critique group, maybe even impartial beta readers had the author taken the time to seek them out and not rushed to publish.

Before publishing you must have at least a few people who know something about writing, and who are not your family and not your friend, give your work conflict-of-interest-free assessments to point out things like backstory dumps, weak characterization and passive writing.

You have subscribed to alerts for Violet Augusta.

You have been added to Violet Augusta's favorite list.

You can also sign-up to receive email notifications whenever Violet Augusta releases a new book.